Kings XI cruise to a comfortable win. Sandeep Sharma was awarded the man of the match for his early inroads. It bye from me now.

@DavidMillerSA12 Miller, The Killer…! Absolute carnage #RCBvsKXIP @Gmaxi_32 he will make up for your wicket.

KXIP 131/4 Ovs 13
D Miller 40(18), Saha 1(4)
Mitchell Starc is into the attack and its a tidy few balls to start of with. The fourth ball is short and wide and is spanked through the covers for yet another boundary Miller boundary. The next boundary is even more spectacular and after the ball is lifted to long off and follows that is cut behind point for another four. Its a David Millier treat out here!
KXIP 116/4 Ovs 12
D Miller 27(14), Saha 0(2)
Albie Morkel comes into the attack and looks good , bowling the line his teammates should have. Bailey’s uncomfortable stay is ended by nicking the ball to the keeper and Saha only blocks the first two balls and its the best over of the innings.
OUT! cParthiv bMorkel 1(7)
KXIP 115/3 Ovs 11
D Miller 26(13), Bailey 1(4)
Chahal is teasing Bailey and the Australian gets off strike. Miller then bludgeons a monstrous six which goes out of the ground. Haven’t seen a bigger six in the tournament so far. Miller punishes through the off side and its only a single.
KXIP 107/3 Ovs 10
D Miller 19(10), Bailey 0(1)
Varun Aaron comes in and a cracking Miller cover drive goes to the boundary. The Protea then pulls on the leg side and its another boundary. Overpitched from Aaron and it is superbly stopped by Yuvraj in the deep and the last ball is a juicy half volley and it is another four.
KXIP 93/3 Ovs 9
D Miller 5(4), Bailey 0(1)
Chahal is enjoying the battle with Maxwell and the the leggie has been impressive and the batsmen only take singles. Maxwell tries to heave on the on side and nothing much goes beyond Mitchell Starc and you would think RCB won the IPL already.
OUT! Maxwell cStarc bChahal 25(11)
KXIP 88/2 Ovs 8
Maxwell 24(9), D Miller 1(1)
Kohli gives the ball to Yuvraj Singh and there it has not been easy to play the spinners. Maxwell then shuts my mouth by slicing Yuvraj straight down the ground for a massive six. Maxwell slams it in orbit and the ball just about sails over the rope. Maxwell then slams the ball to deep square leg and its a boundary. Maxwell show is on
KXIP 69/2 Ovs 7
Maxwell 7(4)
One of the finds of the tournament, Yuzvendra Chahal is into the attack and the batsmen take four singles. Sehwag is enticed by the flight and his loft his mistimed and is safely caught in the deep by Virat Kohli. Maxwell keeps the strike
OUT!V Sehwag cKohli b 30(24)
KXIP 64/1 Ovs 6
V Sehwag 28(21), Maxwell 4(1)
Harshal Patel starts off with a horrible wide down the leg-side. Viru then lefts it over mid-off fielder finger tips for a cracking boundary and the score races beyond fifty already. Harshal bowls another wide and Sehwag gets off strike of the next ball. The Gujarat medium pacer tries a slow ball and its the third wide of the over. Things go from bad to worse for Harshal after his pick up and throw at the non strikers end while the batsmen crossed for a single missed the stumps and Sachin Tana’s valiant effort goes in vain as the ball touches the boundary curtains. Harshal this time gets his man as another slow ball deceives Mandeep and its a simple catch to Albie at mid-on. Maxwell starts off with a classy boundary of a full toss.
OUT!Mandeep cMorkel bHarshal 21(15)
KXIP 45/0 Ovs 5
V Sehwag 22(18),Mandeep 16(13)
Varun Aaron is into the attack and Mandeep’s hook shot goes over the bowler’s head and goes for a boundary. Mandeep then flicks of the hips and there is misfield that allows him to take a single. Aaron then bowls a tame wide and and finishes off what was another good over for Punjab.
KXIP 35/0 Ovs 4
V Sehwag 19(15),Mandeep 10(10)
Morkel continues to bowl. Sehwag dabs it to deep fine-leg and a single comes of it. Mandeep then plays a lovely cut short and the ball is well stopped in the deep by Starc, who dived full length on his wrong side. Mandeep then takes a quick single to give Sehwag the strike. A half-volley is gloriously lifted for a classic Viru-off-side boundary. Another good over for Punjab
KXIP 26/0 Ovs 3
V Sehwag 14(12),Mandeep 6(7)
Starc continues and Mandeep plays a gorgeous cover drive for a boundary. Sehwag nervously prods and the ball falls just in front of Yuvraj at point. A good delivery from Starc again and the ball in front of Chris Gayle at third slip. Well played by Sehwag though, showing deft hands. Starc oversteps and its a free hit! Starc bowls a clever slow ball its rather unfairly been called a wide. Starc darts in in and Sehwag misses of the rebowled free-hit.
KXIP 16/0 Ovs 2
V Sehwag 13(9),Mandeep 1(3)
Albie Morkel bowls the second o er of the match and troubles Viru with a good bouncer. The next ball is short and in the zone when an off-side field is set and the the veteran Indian opener obliges with another four. A single comes of the next ball and the batsmen scamper for a single. Viru unsuccessfully ploughs the final ball.No run.
KXIP 10/0 Ovs 1
V Sehwag 8(5),Mandeep 0(1)
The game is under way at the batting paradise that is the M Chinnaswamy Stadium. Mitchell Starc starts things off and Sehwag slashes and goes fine down to third man for a boundary. Viru plays a glorious cover drive but it straight to the fielder. A wild heave of the next ball is missed but bad ball down the leg side is tucked away fine down fine leg for another boundary. Strarc is targeting the middle and leg and Sehwag takes a single of a leg bye of the fifth ball and Mandeep is beaten of the last ball of the over.

Toss: Royal Challengers win toss and skipper Virat Kohli elects to field first. There are quite a few changes for both teams – South African all-rounder Albie Morkel makes his way back in place of Rilee Roussow and SachinRana replaces Ashok Dinda. For Punjab, Balaji is back and Shivam Sharma is making his IPL debut

Hello and welcome to CricketCountry’s coverage of the Indian Premier League (IPL) 2014’s 31st  game between Royal Challengers Bangalore  and the Kings XI Punjab at the M.Chinnaswamy Stadium in Bangalore. I am R Vishal and will take you through the game that promises to be a good game. With big hitting entertainers on both sides, the spectators should witness a batting treat under the batsman friendly conditions. The last time the home team played here, AB de Villiers played one one of the great IPL knocks of all-time while Kings XI Punjab, with their man with the magnificent blade, Glenn Maxwell have been on a highway to heaven in the tournament so far. 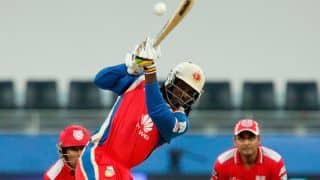