IPL 2015: Mitchell Starc could have made the difference for RCB, feels David Wiese

IPL 2015: Mitchell Starc could have made the difference for RCB, feels David Wiese

Starc pulled out of the IPL 2015 due to a knee strain, though he might play in the latter stages.

Bangalore: Royal Challengers Bangalore (RCB) all-rounder David Weise on Monday said that the presence of injured Australian bowler Mitchell Starc could have made a difference had he played for them in their defeat against Mumbai Indians in Match 16 of the ongoing Indian Premier League (IPL) 2015 on Sunday. READ: MI defeat RCB by 18 runs to record 1st win in IPL 2015

In absence of a top-class fast bowler, RCB conceded 209 runs and eventually lost by 18 runs. READ: Mitchell Starc ruled out of IPL 2015 due to knee strain

“I think Mitchell [Starc] is a top-class bowler. We saw him in the World Cup — he is in form at the moment. He can make a difference on any kind of wicket,” Weise, who took 4 wickets and scored 47 runs, told reporters at Bangalore. READ: RCB crowds make it a pleasure to play in IPL, says David Wiese

Weise however said that despite Starc and Adam Milne‘s absence, the team boasts of good young bowlers for whom unfortunately things did not work out.

“We however got some good young bowlers also — unfortunately though tonight things did not work out for us,” he said.

Weise said captain Virat Kohli‘s decision to chase was right with a strong batting line-up the team boasts of, but failed to reach the target as it’s difficult to go past 200-odd runs target.

“I think it was a right decision to bowl first. We very well back ourselves of chasing with the kind of batting lineup we got, but it is always difficult to chase 200-odd target,” he said.

Asked about team’s strategy to chase 210-run target, Weise said the plan was to keep wickets in hands till the end and self-belief in the side’s ability to win.

“We went onto the field with a belief that we are never out of the chase because the game can change rather quickly and if you keep believing and keep wickets till the end, you never know what can happen. IPL 2015: Schedule with venue details

“You can get 70-80 runs in five overs to win. So yeah, keep believing and get the total was our strategy,” he said.

On his all-round performance against Mumbai indians, Weise said it was pleasing to do so in front of an amazing RCB crowd. IPL 2015: Points Table and Team Standings

“It was unbelievable to play IPL in front of an amazing crowd. The franchisee RCB is unbelievable It was quite pleasing to know that you actually doing something good for the team and in future I hope to churn out such performances,” he added. IPL 2015: Complete Coverage 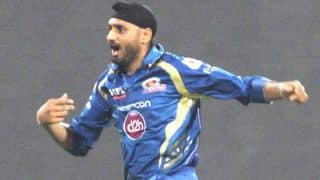