Three cricket fans from West Bengal -- Bhaswati Shantua, Ranjit Seal and Abhijeet Mukherjee -- had questioned Ganguly's position as CAB chief while he is advisor of the Delhi Capitals.

Board of Control for Cricket in India (BCCI) Ombudsman DK Jain on Saturday met Cricket Association of Bengal (CAB) President and Delhi Capitals advisor Sourav Ganguly as well as the complainants in New Delhi in a conflict of interest matter against the former India skipper.

After a three and half hour long discussion, Jain asked all parties to give written submissions ahead of his verdict.

Speaking after the meeting, Jain said: “Matter is sub-judice. I have heard both the parties as well as the BCCI and will soon give my order. However, since hearing is over as per principles of natural justice, both parties can give their written submissions before the final order is pronounced.”

The order in the Hardik Pandya-KL Rahul matter also came out earlier in the day as both the cricketers were fined Rs 20 lakh each. (ALSO READ: Ganguly rejects conflict of interest allegations)

All that Ganguly said before leaving was that the meeting went well. The DC play Kings XI Punjab at the Kotla at 8 p.m. and the DC advisor is expected to be in the dug-out like he has been for the team right through the season. 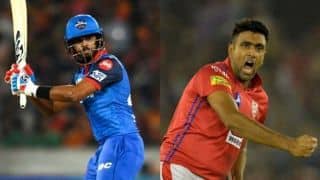 Today’s Best Pick 11 for Dream11, My Team11 and Dotball – Here are the best pick for Today’s match between DC and KXIP at Feroz Shah Kotla Stadium 8pm