Chennai Super Kings (CSK) have opted to bat against Kings XI Punjab (KXIP) in Match 18 of the Indian Premier League (IPL 2019) at the MA Chidambaram Stadium. The defending champions are looking to bounce back at home after going down to Mumbai Indians by 37 runs in their previous match.

CSK made three changes with pacers Shardul Thakur and Mohit Sharma making way for the New Zealand Scott Kuggeleijn, who gets his first taste of the IPL and Faf du Plessis. Harbhajan Singh comes into the side in place of Dwayne Bravo, who has been ruled out of the tournament for two weeks owing to a hamstring injury.

The big news for KXIP, aiming to carry on with the momentum after last win against Delhi Capitals, is that Chris Gayle is back in the side which means the Afghan spinner Mujeeb Ur Rahman will have to sit out. Andrew Tye also finds himself back in the playing XI.

CSK captain MS Dhoni: “We will bat first. The wicket looks good to bat on initially, it’s hard on the top. The wickets that we played on mostly were on the slower side. It’s important to keep backing your strengths, irrespective of how many runs you’re putting on the board. Lots of changes for us. Mohit, Shardul and Bravo are out. Scott Kuggeleijn, Harbhajan and Faf come into the XI.”

KXIP captain Ravichandran Ashwin: We were looking to bat first as well. It looks really hard and hope it remains through the same for 40 overs. It’s quite emotional to be honest. I am very happy to be back playing here in Chennai but I am looking forward to it. Chris is back into the XI, Hardus Viljoen is out. Mujeeb sits out as well and Tye comes in. 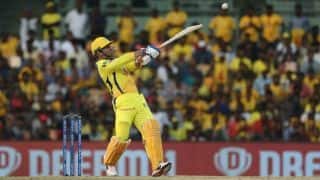