Dhoni said that at the highest level, there aren't any players who are not playing with a niggle or two.

Mahendra Singh Dhoni has battled a dodgy back for a long time and he wants to be careful with it as the ICC World Cup 2019 is around the corner. The Chennai Super Kings skipper said that there has been some stiffness, but it is holding up as of now.

“The back is holding up, it’s not getting worse, with the World Cup coming up, can’t afford that, because that’s too important,” Dhoni said at the post-match presentation ceremony after CSK beat Sunrisers Hyderabad by six wickets in the Indian Premier League (IPL 2019) at the MA Chidambaram Stadium in Chennai on Tuesday.

Dhoni said that at the highest level, there aren’t any players who are not playing with a niggle or two.

“If it becomes worse, I certainly take some time off but at this level you play with some niggle or the other. Because if you wait to get fully fit, then there will be a gap of five years between two matches,” the skipper said cheekily. (ALSO READ: ‘With Shane Watson batting that way, we couldn’t do much’)

Lauding CSK s match-winner Shane Watson, who smashed a thunderous 96 to virtually seal a place in the playoffs, Dhoni said: I think you can give individuals some games and the team gives them the rest. Watson has been a matchwinner for us. He has been batting well in the nets. Whatever small innings he played so far, he was middling them well although he did struggle a bit.

This is the time when you need to back them. The management’s thinking was to give him as many games as possible. And the team winning also means that a player gets more games than he would actually get. It’s good to see different individuals step up every game. 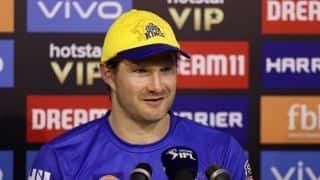