Former Australia captain Ricky Ponting will continue to be the head coach.

Owners of Indian Premier League (IPL) franchise Delhi Daredevils, GMR Group and JSW Sports on Tuesday rechristened the team to Delhi Capitals for the upcoming Season 12 at a glitzy event in the capital.

I have been through a lot of ups and downs in my time as a cricketer. I have realised how important it is to sometimes take a step back and start afresh. A new ideology and approach can do wonders towards revitalising a team, renewing their energy and spirit, which will in turn permeate into the team s performances. Our team currently has all these in abundance and our goal is to achieve our new vision, Ponting said.

“We wanted this name to mean something to each and everyone from Delhi,” Parth Jindal, the director at JSW Sports at the ceremony.

We also want to revolutionise the way the fans connect and engage with their favorite franchise. We believe a change in identity for the club was necessary to effectively live and breathe this vision.

Delhi Capitals will sport a new logo and crest for the upcoming Indian Premier League season. The logo stands for what Delhi is all about.

The crowning of the logo is an entity that s synonymous to its identity the parliament the centre of all action. At the logo s core, is a ferocious tiger, the spirit of Delhi, hungry to win.

Delhi are set to revamp their entire side next season as they released as many as 10 players and traded three players to get Shikhar Dhawan from Sunrisers Hyderabad.

Delhi have retained 14 players from their previous team and can fill upto 10 slots (seven Indians and three overseas) for the IPL Auction on December 18. The franchise have a purse of INR 25.50 crore remaining. “This auction, we will target players basis their availability first. All permutations and combinations need to be tried and tested,” Jindal said on Tuesday. 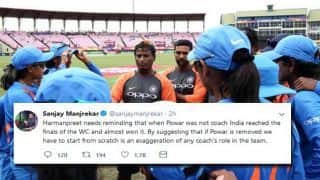