KKR have brought in Rinku Singh, KC Cariappa and Yarra Prithviraj in the playing XI.

Kane Williamson has won the toss and Sunrisers Hyderabad (SRH) have elected to bowl against Kolkata Knight Riders (KKR) in the 38th match of the Indian Premier League (IPL) 2019 at the Rajiv Gandhi International Stadium in Hyderabad on Sunday. (IPL 2019, SRH vs KKR: FOLLOW LATEST UPDATES)

While SRH have retained the same playing XI which powered them to a victory against Chennai Super Kings (CSK), KKR have made three changes to the team which took on Royal Challengers Bangalore (RCB).

Robin Uthappa, Prasidh Krishna and Kuldeep Yadav have made way for Rinku Singh, KC Cariappa and Yarra Prithviraj in the KKR playing XI.

“We are looking to have a bowl. First day game (for SRH after a while), so slight change and one the guys are looking forward to it,” said Williamson at the toss before adding, “They probably feel the same (on winning the game). Everyone wants to win but we had a good last game. So we will look to get on a roll from that. The guys at the top are going brilliantly well. But it is a fresh start, new game and it is important to adapt.” (READ: SRH vs KKR IPL Match Prediction: Desperate Kolkata Knight Riders aim to end losing streak)

Karthik, meanwhile, will be keen to break the losing streak and return to winning ways.

“Now that we have lost the toss, we have to make the most of it when we bat first. We have made three changes to the team. Those players will bring breathe of fresh air to the team. As a captain you have to stand up in the big games and this is a big game for us,” said Karthik. Royal Challengers Bangalore vs Chennai Super Kings, IPL 2019, LIVE streaming: Teams, time in IST and where to watch on TV and online in India 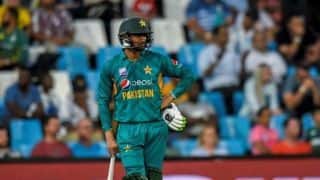