Australia s next Test assignment is a tour of the UAE in October to face Pakistan and Hazlewood, who has played 40 Test matches, stated his intent for a leadership role.

Josh Hazlewood has put his hand up for the vice-captain s role in Australia s Test set-up, stating that a fast bowler s perspective would be beneficial in helping skipper Tim Paine.

The Australian selection panel comprising head coach Justin Langer, Trevor Hohns and Greg Chappell are yet to name a deputy for Paine, who took over the leadership in South Africa in the immediate aftermath of the ball-tampering scandal that erupted at Newlands in March and led to Steve Smith and David Warner, the Test captain and vice-captain, being suspended for 12 months.

Australia s next Test assignment is a tour of the UAE in October to face Pakistan which is followed by home Tests against India and Sri Lanka either side of the new year, and Hazlewood, who has played 40 Test matches, stated his intent for a leadership role.

I would love to do it. As I said, get one of the bowlers on there, get our point of view of what s happening out on the field and so on. It would be exciting to get the role, said the 27-year-old in a video interview with the Australian Cricketers Association.

I guess I have been around the team for quite a while now, played 40 or so Test matches. It s quite a young group once you take those senior guys out. Being a bowler, it would be good to have one of us in the captaincy. It s quite exciting. I think there are a couple of guys who are good candidates.

For the record, Australia has had 46 Test captains and only one, Ray Lindwall in 1956, was a fast bowler – and he led in a solitary match. 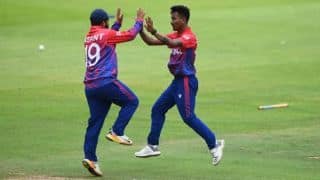 Netherlands vs Nepal 2018, 2nd ODI LIVE Cricket Streaming: Teams, Time in IST and where to watch on TV and Online