Kane Williamson‘s fifth One-Day International century helped New Zealand chase down the target of 277 set by Sri Lanka in the fourth ODI at Nelson to take a 2-1 lead in the seven match ODI series. Williamson was well supported by Grant Elliott and Corey Anderson. Sri Lanka were thin on fast bowling resources and although their spinners put in a commendable effort it wasn’t enough.

New Zealand were rocked early in their run chase as Brendon McCullum‘s attacking style of play got the better of him. He departed for a run-a ball 11 to the nagging Nuwan Kulasekara. Martin Guptill soon followed suit as Sri Lanka’s perseverance was paying rich dividends. New Zealand were pegged back further with the wicket of Ross Taylor who was all at sea against the guile of Rangana Herath who had him caught behind for a measly eight.

Elliott then joined Williamson in the middle. New Zealand were delicately placed at 63 for three when the pair of Williamson and Elliott got together. The duo added 88 runs for the fourth wicket, a partnership that gained momentum slowly and was threatening to take the game away from Sri Lanka when Jeevan Mendis sprung into action and got rid of Elliott against the run of play. The wicket of Elliott didn’t break Williamson’s rhythm though as he brought up his fifth ODI hundred in partnership with Anderson.

The pair took New Zealand within touching distance before Williamson was bowled for a 103 and Anderson fell soon after, run out for 47. The wickets of Williamson and Anderson set the cat among the pigeons with 47 runs still needed at the time from 36 balls. In calamity Luke Ronchi saw opportunity, coming to the rescue of his team as he steered the Black Caps to victory in the company of Daniel Vettori. He took 24 runs from a Thisara Perera over that helped release all pressure and left the Kiwis just one more run to score in 12 balls.  The lack of a quality death bowler hurt Sri Lanka in the end. New Zealand eventually achieved the target with 11 balls to spare.

Earlier, Angelo Mathews won the toss and elected to bat on a resplendent morning at Nelson. Sri Lanka’s top-order fired on all cylinders to power them to 276.  Although the total could have been a lot more, had it not been for a lower-order collapse and some fantastic death bowling by the likes of Tim Southee. Both Kumar Sangakkara and Mahela Jayawardene were among the runs, but both missed out on their hundreds. Sangakkara went past Sanath Jayasuriya’s tally of ODI runs though. 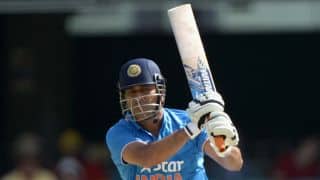 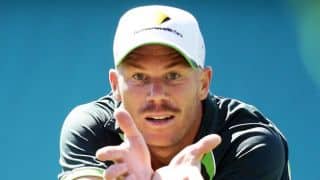