Karun Nair and Pravin Tambe were the architects of Rajasthan's victory.

Rajasthan Royals put in a complete team performance as they beat the Delhi Daredevils by seven wickets in their Indian Premier League (IPL) 2014 contest at the Feroz Shah Kotla, Delhi. Earlier, Rajasthan bowled well to keep Delhi to 152 and then their batsmen were clinical in a run-chase that was complete with nine balls to spare. With this victory, Rajasthan have stayed at the No 3 position in the IPL 2014 Points Table.

There is an intangible Rajasthan formula, which has been the blueprint of their secret to success. It is fascinating how they unearth young players every year who rise to the occasion and help them do the job. And, even though they have some famous names in Ajinkya Rahane and Shane Watson, they back the smaller names to come to the party. Pravin Tambe was the one who made a name last year and continues to do well this season. On Saturday, Rajasthan found Karun Nair striking form.

When Delhi Daredevils batted, their innings was a stop-start affair. To start with, Quinton de Kock raced away to a blazing start with a 33-ball 42. Some of the shots he played were exhilarating. He fearlessly moved across his stumps and smashed deliveries through the leg-side. The shot that stood out was one that he guided over fine-leg for a huge six.

Pietersen came in at No 3 and had looked good during his stay in the centre. Early in his innings, Pietersen was run-out, but the umpire ruled it not out. Although Rajasthan got to know from their dug-out that the umpire had erred, there was no way Sanjay Hazare could have referred it now.

Rajasthan were hoping that Pietersen doesn’t hurt them and Tambe ensured they get back in the game when Delhi were looking good at the half-way stage. In the tenth over, Pietersen smacked one straight to long-on off Tambe and later, de Kock offered a return catch. Delhi were suddenly 71 for three in ten overs. Tambe bowled with a lot of guile and finished with remarkable figures of two for 26 in four overs. It was yet another performance that showed why he is invaluable to Rajasthan’s plans. In the end, Kedar Jadhav’s 14-ball 28 and some late hitting by JP Duminy helped Delhi past 150.

Rajasthan persisted with Nair and Rahane at the top. After a fluent start, Rahane fell when he smashed one straight to cover. In walked Sanju Samson and helped himself to 34 off 28 balls. During that innings, he played his typical shots, fearless through the line. At the other end, Nair was moving gradually and there was a few that he was eating up too many deliveries.

However, it was quite clear that Nair had the touch of timing when he stroked a few around the ground. Samson was stumped in the 10th over off Shahbaz Nadeem as he fell forward while playing a shot. Surprisingly, Rajat Bhatia walked out to bat and helped Rajasthan maintain the momentum with a few aggressive shots. Nair also picked up pace and started finding the boundaries. He was lofting with all timing and also placed deftly. Watson walked in at Bhatia’s fall when Rajasthan were well and truly in command. That partnership had helped Rajasthan well as they added 44 in only five overs.

Nair got to his fifty in the 17th over off 41 balls and then pulled Jaydev Unadkat over mid-wicket for a six. Watson and Nair then finished the run-chase quite easily.

Man of the Match: Karun Nair. 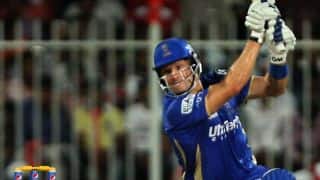