Hesson wants Rahul to focus on the present and believes the future will then automatically take care of itself.

After a torrid time in the longest format of the game, India batsman KL Rahul returned to form in the T20I series against Australia as he managed scores of 50 and 47 in the two games at home. But a tougher challenge awaits him over the course of the Indian Premier League (IPL) and a consistent show will ensure that he bags the all-important No.4 slot in the Indian batting line-up for the World Cup in England. (ALSO READ: IPL 2019: Kings XI Punjab Players to watch out for)

The next month and a half will be very crucial for the Kings XI Punjab (KXIP) player and while all eyes will be on whether or not Rahul manages to earn a ticket on the bus to the showpiece event, KXIP coach Mike Hesson believes that Rahul should not get trapped by the idea that a good show in the IPL will get him a ticket to the World Cup. (ALSO READ: We will rest Shami and Rahul if they feel jaded during the IPL: KXIP coach Mike Hesson)

On the contrary, Hesson wants Rahul to focus on the present and believes the future will then automatically take care of itself. (ALSO READ: Indian T20 League: Punjab s full group stage schedule)

“There is no player who doesn’t go through a tough phase and I think what is important is that how you respond to it and I think KL has been amazing and he has looked in very good touch in the couple of trainings we have had and he has trained hard. He has contributed off the field as well with the younger guys,” Hesson told IANS. (ALSO READ: Revealed: The Brendon McCullum stamp on KL Rahul s cricket graph)

While Rahul has struggled in recent times, ‘Universe Boss’ Chris Gayle has been at the top of his game and scored two hundreds and two fifties in the recently concluded ODI series against England. And Hesson wants him to just go out and enjoy himself in this edition of the IPL as also guide the youngsters in the team. (ALSO READ: Controversy humbled me, I respect the opportunity to play for India: KL Rahul)

“It is important for him to enjoy himself. He is in good form, has been hitting the ball well. The key thing is to fit into the group and make a contribution to the team as a senior player.

“The responsibilities of a senior player is not only to pick wickets or score runs, but also to help the youngsters in the team. Gayle is certainly pretty good in building relationships and helping the youngsters,” he said. (ALSO READ: IPL 2019 team preview: Can Ravichandran Ashwin-Mike Hesson combo resurrect Kings XI Punjab?)

Having successfully coached the New Zealand team, this is Hesson’s first experience in the cash-rich league and he is looking forward to the challenge that awaits him.

“I think having been involved in international cricket for the last six years, to work with a diverse group of players is exciting. They are coming from different cultures and to try and bring them together and challenge them to do better than before is interesting for me. (ALSO READ: Hardik Pandya, KL Rahul needed the rap on their knuckles: Ravi Shastri)

“Whenever you coach a team, there is a bit of pressure, but you cannot let that affect you as that means you haven’t prepared well. As a group we are looking to prepare well and pick teams that suit conditions. I think more than pressure, it is a responsibility that I enjoy,” Hesson said.

Asked to pick two Indian players who he would have loved to have in his team, Hesson, one of the best coaches on the international scene, feels that Royal Challengers Bangalore skipper Virat Kohli and Chennai Super Kings captain MS Dhoni were players any coach would want in his team.

“Any coach would want to have either both or any one of them in the side. Their ability to adapt to a game situation is amazing. Virat is at the top of his game and he keeps pushing himself. (ALSO READ: Important for senior players to guide youngsters: Gavaskar on Rahul-Pandya controversy)

“He adjusts to formats brilliantly and he is world-class. Virat will be looking to do a job for RCB. MS Dhoni was just at his best with the bat in the last year’s IPL. Showed a lot of intent,” Hesson added. 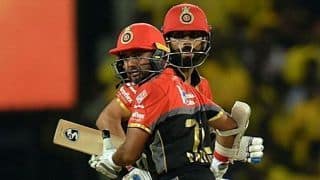