Catch all the live updates of the 3rd ODI between India and England here.

(Can India register their first points in the tri-series or will England hunt India down once again? Catch the Live cricket scores of the 3rd ODI between India and England here)

England have beaten India by nine wickets in the third One-Day International (ODI) at the Gabba, Brisbane. England have now registered their first victory in the tri-series. Meanwhile, India continue to search for the maiden international victory on this tour. India had won the toss and chosen to bat first. However, Steven Finn and James Anderson wrecked havoc has they were bowled out for 153. Ambati Rayudu and Ajinkya Rahane had a fifty-run stand for the second wicket, but then Finn struck. Stuart Binny and MS Dhoni also put up a fighting stand but once Dhoni was out, India folded. Finn completed his first five wicket haul in ODIs. In reply, England were led by the in form Ian Bell. They got off to a very good start and despite losing the early wicket of Moeen Ali, they were never troubled during the run-chase. Bell and James Taylor made batting very easy and they were playing very well during the run-chase. having achieved the target in under 40 overs, England have won the bonus point. This victory puts their campaign on course and India are still waiting for that elusive victory on this tour. Click here to read the match report.

ENG 154/1 | Overs 27.3
I Bell 88 (91), J Taylor 52 (62)
Shami is back and Taylor gets a single first ball. Bell follows that with a single. England continue to knock it around. And the winning run is achieved. Taylor swept it and that is it. England have won by eight wickets. A comprehensive victory for England. They were unstoppable today.

7 to win and drinks are being taken!!

ENG 41/1 | Overs 6
I Bell 28 (19), J Taylor 3 (6)
Bell drives the first ball back but Yadav has stopped that in his run-up. Later in the over, Yadav bowls it on his pads, and he flicks it over square-leg for a four. Bell then works it around for three, Taylor iss off the mark as he drives it through long-off for three. It is now the break. India and England head back. Join us in about 30 minutes from now.
ENG 31/1 | Overs 5
I Bell 21 (14), J Taylor 0 (5)
Binny continues and Bell gets a single early in the over. James Taylor has to play the over and he gets behind deliveries solidly.
ENG 30/1 | Overs 4
I Bell 20 (12), J Taylor 0 (1)
Bhuvneshwar Kumar is out and Umesh Yadav replaces him. The first ball goes past Bell’s outside edge. And then Bell gets a couple through the leg-side. Bell gets three more runs in the over.
ENG 25/1 | Overs 3
I Bell 15 (7)
Bell has driven Binny down the ground and it has gone for a four. he then tries to go over the top over cover and gets a couple with that. He then smashes it through the off-side and gets three. This has been a good start from England. Moeen tries to go over the top and skies it. Mid-off takes the catch. Virat Kohli the catcher.
OUT! M Ali 8 (12)
ENG 16/0 | Overs 2
I Bell 6 (3), M Ali 8 (10)
Bell takes on Bhuvneshwar and he has driven through the off-side for a four. Width on offer and put away. Bhuvneshwar is struggling with his line here as he is also straying on the pads. The last ball is short and Moeen has dispatched it over mid-wicket for a four.

ENG 4/0 | Over 1
I Bell 1 (1), M Ali 2 (6)
England’s innings begins soon as India did not play the full 50 overs. Ian Bell takes a single first ball and it is a no-ball. Stuart Binny is opening the bowling Moeen makes room and tries to cut him over point and gets two off the free-hit. No more damage from the rest of the over.

India can still win if they take 8-9 early wickets.

Stuart Binny 44 at Gabba, missed a fifty Roger Binny had made his only ODI fifty (57) vs Australia at Ahmedabad – 30 years ago! #IndvsEng

IND 153/8 | Overs 39
S Binny 44 (53), M Shami 1 (6)
Binny smashes a six! That has come out of nowhere. He charges to Steven Finn and dispatches a length ball over mid-on for a six. He makes room again, but misses. And then he upper cuts, which goes down to third-man on the bounce. India’s 150 is up. Shami gets off the mark by working one to third-man. Finn bowls it short and Binny tries to pull. However, he misses it down the leg-side. The Englishmen appeal, but it is turned down. It is a wide. Binny tries to pull again and it seems to have taken something. Buttler takes it. However, it is given not out. Replays show it hit Binny on the helmet.
IND 143/8 | Overs 38
S Binny 37 (49), M Shami 0 (4)
Anderson gets another wicket! He has been castled by Anderson. India in deeper trouble. They have lost three wickets in the last eight balls and that has dented them severely. Mohammed Shami is the new batsman. He plays out the over.
OUT! B Kumar 5 (5)

Very good for S Finn ….it’s the bounce that has troubled India …

IND 141/7 | Overs 37
S Binny 37 (49),  B Kumar 3 (3)
MS Dhoni is gone. Steven Finn is the man! He bowls a slow short ball and Dhoni gloves it through to the wicketkeeper. Buttler has effected five dismissals now. Akshar Patel is in and Finn bowls him first ball. Two ducks in a row for the left-hander. Finn came from round the wicket to effect the dismissal. Bhuvneshwar Kumar is the next man and he leaves the hat-trick ball. Bhuvneshwar is off the mark with three through the off-side. And Finn has a no-ball to show! Finn has knocked down the stumps. This has happened after such a long time!
OUT! MS Dhoni 34 (61) A Patel 0 (1)

Big news: Rohit Sharma is out with a hamstring niggle. Ambati Rayudu comes in his place. Stuart Binny replaces Ravichandran Ashwin. England have one change with James Anderson coming back for Chris Jordan.

Hello and welcome to CricketCountry’s coverage of the second One-Day International (ODI) between India and Australia at Brisbane. I am Nishad Pai Vaidya, and I will be bringing you all the live updates from the what is expected to be an exciting contest. READ: What India and England need to to win

India is facing England in the third  of the ongoing tri-series in Australia. The match is going to take place at the iconic Gabba ground at Brisbane. It is going to be an important match in the context of the series, as both India and England are yet to win a game in this tri-series. Though the weather forecast for this game is not very good. According to weather reports, there is 80 percent possibility of thunderstorm at Brisbane on Tuesday. READ: India’s batting should be wary against England’s pace attack

In the points table India are currently in the second position because of a close game against Australia on Sunday. England on the other hand lost their first game against Australia and also conceded a bonus point to them, which damaged their net run rate. So its high time for the English team. If the match gets cancelled, it will hurt England more than India. READ: Preview of the match here

Meanwhile England’s premier fast bowler, James Anderson is likely to be fit for this game. His experience and skills hand be handy for England in the cloudy and wet conditions of Brisbane. Indian batsmen should look to play safely against the pair of Anderson and Stuart Broad. If Anderson is fit, than he will most probably replace Steven Finn.

For India, the worries are not so much. They had a good outing at Melbourne and MS Dhoni will look to keep the same team for this game. The only change which might happen is Stuart Binny in place of Akshar Patel because of the seam friendly conditions of Gabba. But a strong case in favour of Binny is required for Dhoni to drop a spinner against a side like England. 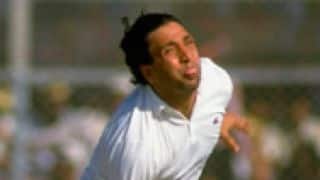 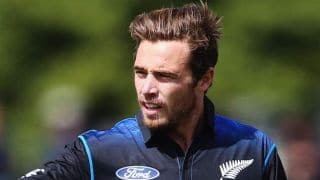