Manan hit Shakib for two sixes in the fifth over.

Morne Morkel bowled the sixth over of the innings for the Kolkata Knight Riders (KKR) against Kings XI Punjab (KXIP)  in the Indian Premier League (IPL) 2014 Qualifier 1. Manan Vohra hit a six off the second ball to jump to 26. However, off the fifth delivery, Manan top-edged one to Umesh Yadav, to boost the par score to 49 after six overs. KXIP were left at 46 for two at the end of that over.

Sunil Narine bowled the next over. And started off with a couple of dot balls. There was a slight drizzle and the covers were threatening to come on. The par score at the end of five overs was 37 runs. KXIP were struggling to get there, but Saha managed to get a boundary off the final ball.

Earlier, Morne Morkel bowled the third over of the innings. Wriddhiman Saha and Manan Vohra were tentative after the early loss of Virender Sehwag’s wicket. Saha hit a six off the final ball to take KXIP to 17 for one after three overs.

Umesh Yadav came on to bowl the second over of the innings, and tasted success right away. Virender Sehwag struck a short and wide ball straight to Shakib at point. Umesh followed up the over very well, by conceding just three runs including a wide ball.

Morne Morkel started off proceedings to Virender Sehwag, who took first strike. Sehwag started positively for KXIP by hitting Morkel in the air over covers first ball. However, only five runs were scored off the first over. Manan Vohra edged to Yusuf Pathan in the slips but it fell just short. 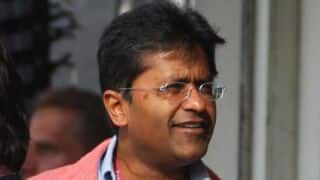 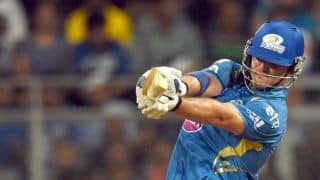