India B overhauled the 218-run target set by India A by seven wickets and booked a place in the final.

Mayank Agarwal continued his impressive form and struck a match-winning century for India B against India A in the eighth match of the Quadrangular tournament. Agarwal s seventh List A century helped India B overhaul the 218-run target set by India A and win the match by seven wickets and book a place in the final. Agarwal s knock also made him the leading run-scorer this year in List A cricket. In 19 innings, Agarwal has totalled 1376 runs at an average of 76.44.

A day after Agarwal said he was happy with the way he is batting and that his India selection will happen when it has to, the Karnataka batsman single-handedly took the game away from India A. The fact that the opposition scored a modest total of 213 was the ideal platform for Agarwal. He and Ishan Kishan raised up India B s fifty in the 11th over. Once Kishan departed, Agarwal found another able ally in Shubman Gill and the two put on 97 for the second wicket. Agarwal, during his 114-ball knock, scored 14 boundaries and three sixes.

India B looked set to achieve the target from the beginning without any hassle, mainly because they were able to form partnerships throughout the innings. Khaleel Ahmed bowled economically, giving away just 33 runs and picking up the wickets of Kishan and Agarwal who departed with India B just 14 away from victory. Skipper Manish Pandey, who was at the other end when Agarwal was dismissed, took his team over the line. This is India B s second win following their victory over South Africa A on Thursday.

For India A, it was once again the in-form Ambati Rayudu, who top-scored with 48, along with sizeable lower-order contributions from Sanju Samson and Krishnappa Gowtham. Medium-pacer Prasidh Krishan, who impressed for Kolkata Knight Riders in the IPL 2018 with 10 wickets in seven matches was the reason why India A were restrained from achieving a challenging total. Krishan restricted the India A top order to 45/3 removing their first thee batsmen Ravikumar Samarth, Suryakumar Yadav and Shreyas Iyer.

With Rayudu gone and Krunal Pandya soon after leaving India A at 136/6, it was up to Samson and Gowtham to push India B towards a respectable total. Gowtham was the first to depart, bringing their admirable 45-runs stand to an end. However, once Samson was gone, caught by Kedar Jadhav off Shreyas Gopal, it signalled the beginning of the end. Deepak Chahar and Mohammed Siraj tried, but it was too late.

Elsewhere, Australia A beat South Africa A by 32 runs riding on a century from skipper Travis Head. 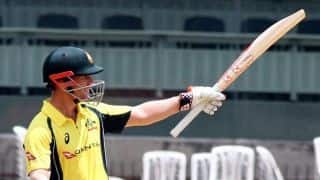 Nottinghamshire’s Jake Ball ruled out for reminder of 2018 season