New Zealand have declared their second innings at 680 for eight to set India an improbable target of 435 in the second Test in Wellington on February 18, 2014. Brendon McCullum scored a historic triple century to pile more misery on the Indian bowlers on Day Five. He was dismissed for 302. James Neesham was unbeaten on 137 on debut. Zaheer Khan picked up five wickets in the innings for India.

McCullum got his first four with a flick towards mid-wicket off Ishant. McCullum then pulled a short delivery from Zaheer over wide mid-on for a four. Neesham then played a brilliant cover drive for a four to a length delivery from Ishant. With that, New Zealand crossed the 600-run mark.

Ishant then found the outside edge off McCullum’s bat, but the ball fell just short of MS Dhoni behind the wickets. Zaheer then found the edge of Neesham’s bat twice and on both occasions the ball went for a four through third-man.

McCullum then rocked back on his back-foot and pulled a back of a length delivery for a four behind square on the leg side. Ishant then bowled a bouncer and Neesham hooked that over the deep backward square-leg fielder for a four. He then got two runs towards deep mid-wicket and reached his century.

Neesham became the 10th New Zealand player to score a century on Test debut. Soon after, the moment everyone were waiting for arrived.

McCullum was on 298 when he played a late cut for a four to brake Martin Crowe‘s New Zealand record of 299. He raised his bat and acknowledged the appreciation of everyone at the Basin reserve. This was the 28th occasion a triple century was scored in Test cricket.

But two deliveries later, he edged a back of a length delivery from Zaheer to Dhoni. He got a standing ovation from everyone present as he left the field.

Tim Southee was the next to fall, but not before scoring 11 runs off nine deliveries with two fours. He skied a length delivery from Zaheer and Cheteshwar Pujara took a good catch at short gully. That got Zaheer his fifth wicket in the innings. This was Zaheer’s 11th five-wicket haul in Test cricket. He also bowled 50 overs in the innings, making it the first time he has done so in Test cricket.

Neesham, though, did not stop the scoring as he hit one from Zaheer through mid-wicket and through third-man for fours. New Zealand had taken their lead over 400 runs. Neesham then played a back-foot square drive for a four. He then flicked a full delivery from Mohammed Shami for a four through mid-wicket.

Shami then bowled a short delivery and Neesham hooked it for a four towards fine-leg. Ravindra Jadeja then struck Neil Wagner on the pads and the Indians appealed for what looked like a clear LBW decision, but the umpire said not out. McCullum then declared the innings, setting India an improbable target to chase. 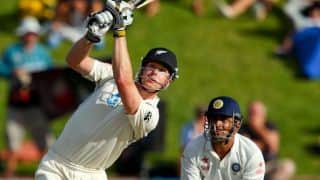 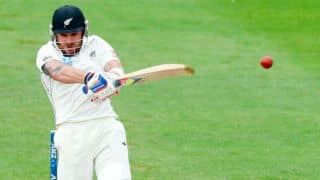