Chasing a modest 232, opener Martin Guptill notched up a pulsating hundred as the Kiwis cruised to victory in 44.3 overs.

New Zealand captain Kane Williamson hailed his side immaculate performance as the hosts thrashed Bangladesh by eight wickets in the ODI series opener at McClean Park in Napier on Wednesday.

The Kiwis didn t have a daunting set in front of them as Bangladesh folded for 232 in 48.5 overs after opting to bat. Left-arm pacer Trent Boult and offspinner Mitchell Santner were the pick of the bowlers with three wickets each. (ALSO READ: 1st ODI, report: Martin Guptill’s 117* defeats Bangladesh)

Chasing the modest target, opener Martin Guptill, returning from injury, put behind his run of poor scores and notched up a pulsating hundred his 15th ODI century as the Kiwis cruised to victory in 44.3 overs.

Very good performance. The bowlers set the tone first up and we were able to pick the early wickets which we are always after. From thereon we were able to pick regular wickets. Bangladesh batted a long way down and made life difficult at times even when you thought you are in a position of strength, Williamson, who added just 11 to the run chase, said at the post-match presentation ceremony. (ALSO READ: Batting is a concern, bowling needs some work: Mashrafe Mortaza)

Then Martin was brilliant, fanstastic hundred and everyone did their part. Something we always focus on is the attitude on the field and intensity we bring. We were good in the field, hope we back that up in the next game. It is just going back to basics of what you are trying to achieve as a group and today was a good example of that, he explained.

The win ensures New Zealand have kept their winning record against the Tigers intact. The tourists, on their fifth tour to Black Fern land, are yet to win a match across any format. The second of the three-match ODI series will be held at Christchurch on February 16. It has been a while so will be great to have some cricket there, Williamson said. 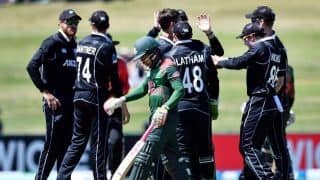