Fitness was cited as the main reason for Mathews' axing from Sri Lanka's ODI squad in September.

The pair of Kusal Mendis and Angelo Matthews have batted Sri Lanka into a position from where, with rain forecast for day five in Wellington, they can leave the Basin Reserve with a draw few could have envisioned.

From an overnight 20/3, Sri Lanka ended day four on 259/3 with Mendis (116*) and Mathews (117*) having extended their stand for the fourth wicket to 246 – the second best in Sri Lankan history – while denying New Zealand a wicket all through Tuesday.

Mendis was the first to reach three figures, but it was his senior partner Mathews who attracted the shutterbugs when he secured his ninth Test hundred. As soon as he reached the landmark, Mathews took off his helmet and got down on the ground to celebrate with push-ups on the pitch. He then turned towards the Sri Lanka balcony at Basin Reserve and flexed his right bicep.

Fitness was pointed out as the main reason for Mathews being shown the door from Sri Lanka’s ODI squad and removal of the captaincy in September. The 31-year-old did not accept the sacking quietly, claiming he was made the ‘scapegoat’  for a shoddy show that saw Sri Lanka exiting the Asia Cup in the first round after losing to Afghanistan and Bangladesh.

Upon the team’s return to Sri Lanka, Mathews met with the head coach Chandika Hathurasingha at Sri Lanka Cricket’s high performance centre, where he was told that the selectors had concerns over his fitness and would not pick him for the home series versus England.

This came a day after Mathews submitted a letter to SLC in which accused the board of blaming him solely for the team’s exit from the Asia Cup. In his letter dated September 23, Mathews also threatened to retire from ODIs and T20Is after being dumped  as captain of the limited-overs teams.

Last week, Mathews was recalled  to Sri Lanka’s ODI and T20I squads for the limited-overs leg of their tour of New Zealand. 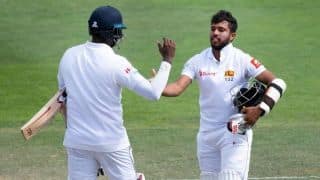 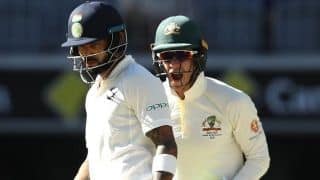