Pakistan, ranked No 5 in ODIs, will face second-ranked India in the UAE on September 19.

Mohammad Zahid, the former Pakistan fast bowler, believes that Sarfraz Ahmed s team is the favourite to lift the 2018 Asia Cup that runs from September 15-28 in the UAE.

Pakistan are ranked fifth in ODIs, three spots behind India with whom they have been pooled in Group A of the Asia Cup along with one of the qualifying teams. Writing for pakpassion.net, Zahid singled out Pakistan s bowling resources as the decisive factor.

Pakistan s recent performances on the tour of Zimbabwe and their improved ranking in ODIs seems to make them clear favourites for the upcoming Asia Cup to be played in UAE, wrote Zahid, a tearaway fast bowler who played five Tests and 11 ODIs between 1996 and 2003.

Whilst it may be true that none of the participating teams will be strangers to Asian conditions such as those they will encounter in UAE, and even the top teams can stumble if they don t play well on a given day, I am convinced that Pakistan will be ahead of the pack due to the quality of their bowling attack. Moreover, the manner in which this Pakistan team is united and combines well makes me think that they have a fair chance of lifting the trophy.

The last time Pakistan and India met in international cricket was in the final of the 2017 ICC Champions Trophy in London. On that day, opener Fakhar Zaman hit a match-winning 114 before Mohammad Amir and Hasan Ali bowled India out for 158 to win by 180 runs. Sarfraz s team will play Virat Kohli s India on September 19 in the Asia Cup, and Zahid tipped Pakistan to prevail.

When it comes to any game involving the two Asian giants of cricket, predicting winners is a tough call. The much-awaited encounter which is currently scheduled for 19th September promises to be a competitive one. As against the other Asian teams, in my view Pakistan have the advantage over India due to being equipped with an excellent bowling attack, he wrote.

If the Pakistan batsmen can do their job right, then their bowlers can win this crucial game for them. The pitches in UAE are known to be batting friendly and both the Pakistani and Indian batsmen will have little problems, which is why it will be the quality of bowlers which will make the difference and that is where Pakistan will have the advantage. The fact that Pakistan have been playing their home games and the Pakistan Super League in UAE also gives them home advantage which hopefully they will put to good use in this encounter and the whole Asia Cup campaign.

Zahid, who despite just 16 appearances for Pakistan was recognised as one of the country s quickest ever bowlers, said that in the 18-year-old Shaheen Afridi he saw a future great. Afridi, who made heads turn during the ICC Under-19 World Cup at the start of the year, has broken into the senior Pakistan side and has played three T20Is.

From what I have seen of Shaheen Shah Afridi, I can say that he looks like a proper athlete and his bowling is very impressive, wrote the 42-year-old. He has a good run-up, a smooth action and has the potential to be a fast-bowler who will be able to regularly hit the 90+ mph mark. He is a genuine fast-bowler and has a great future ahead of him for Pakistan.

Zahid, however, warned the Pakistan team management to not hurry the teenager into Test cricket.

Whilst he is doing well in the shorter formats of the game, I would caution against fast-tracking him into Tests as a regular team member, he wrote. He is just 18 years old, and his physical development is not complete as yet and we need to make sure that he does not get injured if too much load is put on his body, as would be the case if he was playing too many Tests. I don t mind him playing Tests, but he needs to be managed properly and for the next 2-3 years, he will have to build-up his physique so that he can be an effective bowler for Pakistan in the future. 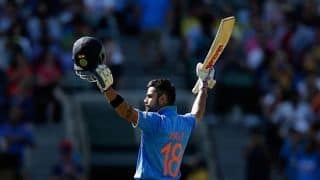