Also retained is off-spinner Bilal Asif who has just five wickets to show in the last three Tests.

Dubai: Misfiring opener Mohammad Hafeez survived the chop on Tuesday as the Pakistan selectors named an unchanged 15 man squad for the third and final Test against New Zealand starting in Abu Dhabi next week.

Hafeez has been struggling with his form ever since scoring a hundred on his comeback Test against Australia in Dubai last month. Since then he has managed just 66 runs in six innings. Hafeez has scores of 20, 10 and nine in the two Tests against New Zealand.

Pakistan levelled the three-match series with a convincing innings and 16 runs win in the second Test in Dubai on Tuesday. New Zealand won the first Test by four runs in Abu Dhabi last week.

Also retained is off-spinner Bilal Asif who has just five wickets to show in the last three Tests after taking six wickets against Australia in Dubai last month.

The Pakistan selectors resisted the temptation to include dashing opener Fakhar Zaman who is recuperating from a knee problem after impressing with 94 and 66 in his Test debut against the Australians. 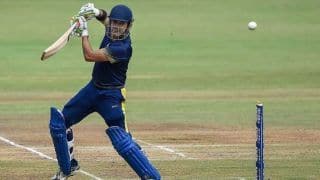