South Africa, like Pakistan have an opening conundrum of their own.

Pakistan take on South Africa in a Pool B encounter at Auckland. Pakistan had an easy outing in their previous match against United Arab Emirates (UAE) by 129 runs and will be confident going into the match against South Africa. The Proteas on the other hand are not short of confidence, either. They have managed to win three games out of four, and just like their opponents, have won two in a row, first against West Indies and Ireland.

Pakistan will be given a major boost after one of their openers Ahmed Shehzad got a brilliant 93, although they still have problems with the opening partnership. Nasir Jamshed has been wreckless in his shot selection to say the least and has been a liability when it comes to fielding. His inclusion in this game will be highly surprising. Youngster Sarfraz Ahmed will be a much better bet at this crucial juncture of the tournament. ICC Cricket World Cup 2015: POINTS TABLE

Pakistan have good set of fast bowlers and replacing them will be a tough task. However, leg spinner Yasir Shah could be given a chance to show off his skills. He is a genuine leg spinner and might give a thing or two to think about for the South Africa batsmen. But there are high chances that Pakistan will not hamper with the combinations of it’s bowlers as Sohail Khan, Wahab Riaz and Rahat Ali have more or less been on the money so far. Top 10 bowlers in the ICC Cricket World Cup 2015

South Africa, like Pakistan have an opening conundrum of their own. With Quinton de Kock not firing at the top of the order, the responsibility of stabilising the innings has fallen into the hands of Hashim Amla and Faf du Plessis. Both Amla and du Plessis have been in good form lately and their 247-run stand in the previous game against Ireland was a treat to watch. ICC Cricket World Cup 2015: SCHEDULE & MATCH DETAILS

Their middle-order has been in fine nick with Rilee Rossouw and skipper AB de Villiers firing all guns blazing. They might however consider promoting Rossouw to the opening slot and let de Villiers dawn the wicket keeping gloves. This will give room for JP Duminy to come into the middle-order, which will make this South African line-up even stronger. Top 10 fielders in the ICC Cricket World Cup 2015

It’s a game that both teams will not want to lose. A win for South Africa will guarantee them a spot in the quarter-final and Pakistan will find it difficult to qualify. As Waqar Younis said after their win against UAE, Pakistan need to beat a “big team” to get their confidence back.  They need not look any further than South Africa for that. It’s a crucial match for both the teams as they look to carry on their winning momentum. ICC Cricket World Cup 2015: SCHEDULE & MATCH DETAILS 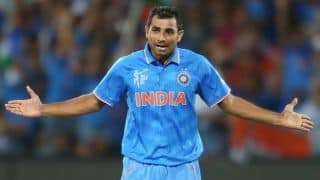 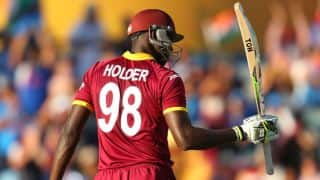