K’tka 230/0 | Overs 66
KL Rahul 94(189), G Satish 117(207)
A fine day for Karnataka. First their seamers did the task with the ball dismissing the last five batsmen for just 33 runs and then an unbeaten opening partnership between Ganesh Satish and Robin Uthappa. On a big day, Satish would have thanked his luck, first for batting ahead of his regular position and then getting two reprieves in the field. Catch the Day 2 report here.
Stumps Day 2
K’tka 214/0 | Overs 64
KL Rahul 87(182), G Satish 108(190)
Karnataka are well on their way to bat Maharashtra out of the game. After Satish, now Rahul is set to reach his ton. Meanwhile, Akshay Darekar has come back in the attack and Rahul lofts on over long-on for a boundary. 200-run partnership comes up between the two. What a brilliant partnership this has been.
K’tka 193/0 | Overs 58
KL Rahul 74(158), G Satish 105(178)
He wasn’t even supposed to walk in at No 3, but few overs before lunch, he was sent in by the team to hold fort after Robin Uthappa was retired hurt. And what an innings by Ganesh Satish. Sixth First-Class hundred for him. Thanks to the two catches dropped by Maharashtra, Satish well on his way for a big score on the featherbed.
K’tka 179/0 | Overs 53
KL Rahul 74(147), G Satish 91(162)
Dropped! Satish and Rahul get a reprieve each. The day couldn’t have been worse for Maharashtra. Satish flicks one delivery from Sanklecha straight to mid-wicket and Bawne floors it. Was a straightforward catch, but he fumbles thrice before dropping it. Two overs later Sanklecha too drops a sitter off his own bowling.
K’tka 170/0 | Overs 49
KL Rahul 67(129), G Satish 89(153)
The Karnataka score is galloping ahead with Satish and Rahul still intact on the crease. Satish is on course for a hundred here. Meanwhile, Akshay Darekar has once again left the field due to the finger injury.
K’tka 149/0 | Overs 43
KL Rahul 62(112), G Satish 75(134)
They have realised that the team is in a comfortable position and there’s no harm in going for their shots. Satish smashes three boundaries in the first over after tea. Rahul follows with a six in the next over by Khurana. They are trailing by just 156 runs.

K’tka 121/0 | Overs 37
KL Rahul 51(100), G Satish 58(110)
Akshay Darekar was hit on the fingers and walked off the field. Chirag Khurana completed his over. Meanwhile, Lokesh Rahul has completed his half-century. Just 10 minutes to go for the tea break and Karnataka have completely changed the momentum of this game.
K’tka 107/0 | Overs 32
KL Rahul 43(86), G Satish 52(94)
Well-compiled half-century for Ganesh Satish. Came in to bat after Uthappa was retired hurt. Things could have slipped if Maharashtra had sneaked in a wicket then, but this unbeaten partnership has pushed Maharashtra to the wall. They have been an excellent batting unit and firing once again in the match that matters.
K’tka 85/0 | Overs 27
KL Rahul 32(69), G Satish 42(80)
Maharashtra are trying everything that’s possible. Sanklecha has bowled well but without any reward. Satish is inching towards his half-century while Rahul is content pacing his innings slowly. Akashay Darekar has been introduced from the other end along with Sanklecha. Drinks Break
K’tka 68/0 | Overs 22
KL Rahul 27(58), G Satish 30(61)
Pressure increasing on Maharashtra. Post lunch, the Karnataka batsmen have hardly been tested. They are strolling for singles and twos. Not much assistance from the track as well. Satish and Rahul are content playing the overs patiently and focusing on setting a good platform.
K’tka 49/0 | Overs 17
KL Rahul 20(48), G Satish 18(41)
We’re back after lunch and, Karnataka have made a steady start. There’s not much movement for the fast bowlers and the two batsmen have looked comfortable post the lunch break. The news about Uthappa is that the injury isn’t serious and the right-hander will bat whenever needed.
K’tka 43/0 | Overs 14
KL Rahul 18(43), G Satish 14(28)
Sensible batting by Karnataka, after Uthappa went back retired hurt, these two batsmen have not one for any rash shots though they gave an opportunity to Maharashtra. They will be happy going in to lunch without losing any wicket. They are trailing by 262 runs at Lunch. Catch the Lunch Report Here
K’tka 38/0 | Overs 10
KL Rahul 17(32), G Satish 11(14)
On the last ball of the fifth over, Uthappa was struck on the elbow. He was in discomfort and waited for a long time getting treatment from the physio and finally decided to walk off retired hurt. in the ninth over, Satish would have been out to Fallah. He edged at an away going delivery, Motwani dived halfheartedly and the ball went past his gloves for a boundary. Crucial opportunity missed. In the next over by Sanklecha, Rahul played on straight back to the bowler but he dropped it. Rahul added to the bowler’s frustration by driving the ball sweetly through covers for a boundary.
K’tka 14/0 | Overs 5
R Uthappa 10(14), KL Rahul 4(16)
Solid start from Karnataka openers, Lokesh Rahul adopting a cautious approach, while Robin Uthappa has already struck two boundaries. After a good bowling performance, the openers will look to pile on some pressure. Samad Fallah manages to put Uthappa in some discomfort.
MAH 305 | Overs 104.1
S Fallah 2(3)
It’s all over. Just 32 runs added and Maharashtra have lost their last five wickets. Good bowling from Karnataka seamers. Aravind, V Kumar and Mithun get three wickets each.
OUT! Darekar 2(12)
MAH 304/9 | Overs 103
S Fallah 2(2), Darekar 1(6)
Maharashtra are falling apart here. Third wicket to fall inside one hour. Sangram Atitkar is caught down the leg-side and Sreenath Aravind strikes again. Anupam Sanklecha too is dismissed leg-before by Vinay Kumar. Last man Samad Fallah is there in the middle.
OUT! S Atitkar 50(97), A Sanklecha 1(6)
MAH 294/7 | Overs 100
Atitkar 44(92), Darekar 0(1)
Mundhe’s job was cut out i.e. to support Atitkar. He gets a boundary on the last ball of the 98th over from Mithun but at the same time survived after poking at some wide deliveries. Sreenath Aravind who was bougfht in to the attack got on to move away from Mundhe and he poked at it. Brilliant catch from Manish Pandey at second slip. Flew to his right and caught it. Excellent bowling, great catch and Karnataka are well on course for restricting Maharashtra below 350.
OUT! Mundhe 7(32)
MAH 284/6 | Overs 96
Atitkar 38(82), Mundhe 3(19)
Consecutive maiden overs by Abhimanyu Mithun. Unlike the huge no-ball he delivered last morning, Mithun has been right on target today. After the brilliant delivery to dismiss Bawne, Mithun almost had Shrikant Mundhe who shouldered his arms to that one. Meanwhile, Atitkar picks a boundary against Vinay Kumar.
MAH 273/6 | Overs 92
Atitkar 29(75), Mundhe 1(2)
Big Wicket for Karnataka. The first ball of the over and Mithun gets the ball to cut back in to Bawne. He is known to do that consistently. Bawne is late to react and he is surprised that the ball cut in so much, went through his bat-pad to knock down the middle-stump.
OUT! Bawne 89(173)
MAH 272/5 | Overs 91
Bawne 89(178), Atitkar 29(66)
The ball is just six overs old and Vinay Kumar will be eager to capitalise and make some early inroads. Vinay starts the proceedings on the second day and starts off with a straighter on which was defended solidly by Sangram Atitkar. The rest of the deliveries were pitched outside off and moving away and the batsman just raises his shoulders.

Hello and welcome to the Live Blog of the second day’s play of the Ranji Trophy 2013-14 final between Karnataka and Maharashtra at Hyderabad. It was an even contest on the first day with the seamers putting Maharashtra on the backfoot and the batting side managing to stitch a few gritty partnerships to hold on at stumps. Maharashtra first fought with a fighting half-century by Chirag Khurana, but the applause will go for Ankit Bawne for holding the innings together beautifully. He started off cautiously and continued in a similar fashion until the dismissal of his skipper Rohit Motwani. Despite winning the toss, Maharashtra failed to take advantage, but they will pin their hopes on Bawne to lead the way.

Catch the Highlights of the first day’s play here 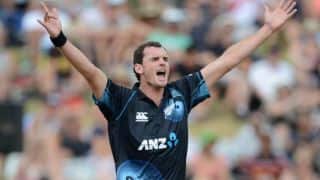