For Saurashtra, Sakariya was the pick of the bowlers with five for 83 in his 22 overs.

After bowling out Gujarat for 324, courtesy debutant left-arm pacer Chetan Sakariya’s five for 83, Saurashtra ended their first innings at 221/3, trailing by 103 runs on day two of their Ranji Trophy 2018-19 Round 3 Elite A match at the Gokulbhai Somabhai Patel Stadium in Nadiad on Wednesday.

Resuming their innings at 269/6, Sakariya, who snapped three wickets on the opening day, struck first blood to send Piyush Chawla, who edged it behind to wicketkeeper Snell Patel, for 20. Four overs later, Sakariya had Chintan Gaja caught by Harvik Desai for eight. Siddharth Desai added just four before he was caught by Harvik off Prerak Mankad. Kamlesh Makwana snapped the last wicket of Hardik Patel, who was trapped lbw for a duck. Roosh Kalaria stood firm and was left nine runs short of his third first-class century.

For Saurashtra, Sakariya was the pick of the bowlers with five for 83 in his 22 overs.

In reply, Saurashtra were helped to a brilliant 102-run partnership from openers Harvik and Snell Patel. Left-arm spinner Siddharth Desai broke the dangerous-looking partnership after Patel, who registered his fifth half century, was caught by Bhargav Merai for 62. Samarth Vyas was run out by Priyank Panchal for 37, while Arpit Vasavda was trapped lbw off Hardik Patel for 20 to leave Saurashtra at 189/3 in the 54th over.

Harvik and new batsman Sheldon Jackson (22*), who scored a fine 147 in Saurashtra’s opening match against Chhattisgarh, were engaged in a damage control 32-run partnership for the fourth wicket as Saurashtra ended the day at 221/3 when stumps were drawn. Harvik was unbeaten on 79 off 213 balls, his innings laced with 13 boundaries and one six. 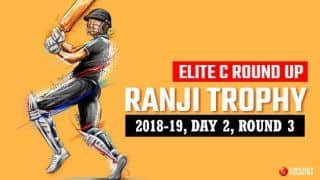 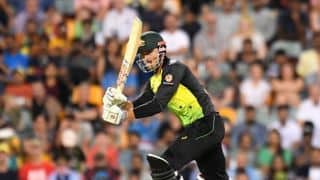