With the three points, Hyderabad have jumped from their bottom place to eighth spot with four points in three matches.

Railways walked away with three points after securing a first-innings lead against Chhattisgarh in their Ranji Trophy 2018-19 Elite A Round Three match at the Shaheed Veer Narayan Singh International Stadium in Raipur on Friday.

Resuming their overnight score at 1/2, Chhattisgarh declared their second dig at 219/5 late in the day, leaving Railways with a 189-run target.

Earlier, with both opener back in the dressing room thanks to Karan Thakur, Shivendra Singh and Sanjeet Desai made 84 runs for the third wicket before Shivendra was caught by Arindam Ghosh off Anureet Singh for 38.

Desai then found support from captain Harpreet Singh Bhatia as the duo stitched 53 runs for the fourth wicket. Thakur returned to break the partnership and claim his third wicket in Desai, who departed for 67, reaching his maiden first-class fifty in his third match.

Amandeep Khare (43*) and Bhatia, who was unbeaten on 59 then guided Chhattisgarh to 219 before the captain decided to declare the innings.

In reply, the Chhattisgarh bowlers failed to make any inroads, claiming the only wicket of Shivakant Shukla, who departed for a duck off Sumit Ruikar.

At stumps on the final day, opener Saurabh Wakaskar and wicketkeeper-batsman were unbeaten on 17 and 53 respectively.

With the three points, Hyderabad have jumped from their bottom place to eighth spot with four points in three matches. Chhattisgarh have replaced Railways in the bottom with just three points from three matches. 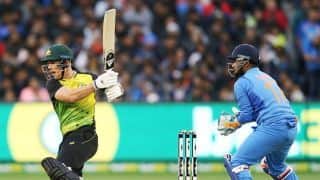 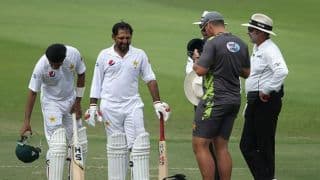