Abhimanyu Mithun and Krishnappa Gowtham ended the innings with figures of 3/48 and 3/54 respectively.

Bengaluru: Karnataka grabbed honours on the opening day of their Ranji Trophy 2018-19 quarterfinal, bowling out formidable Rajasthan for 224 in their first innings at the Chinnaswamy Stadium on Tuesday.

At stumps, Karnataka were 12 without loss in five overs with openers Ravikumar Samarth and Dega Nischal batting on seven and five, respectively.

The day also saw a couple of bad decisions by the umpires. Robin Bist‘s leg before dismissal came despite the ball climbing up and Rajesh Bishnoi was lucky to survive off Krishnappa Gowtham.

Sent into bat, none of the batsmen made any significant contributions, except for skipper Mahipal Lomror (50) and Bishnoi (79) hitting fifties batting lower down the order.

All the bowlers were among the wickets, barring Ronit More. Gowtham and Abhimanyu Mithun bagged three wickets each to emerge as highest wicket-takers. (ALSO READ: Quarter-final 4: Gujarat trail Kerala by 88 runs)

Rajasthan began their innings poorly by loosing opener Amitkumar Gautam with just 18 runs on the board.

Chetan Bist and Lomror consolidated, but the former was cleaned up by Shreyas Gopal, leaving the visitors at 64 for two.

Rajasthan further lost two wickets of Salman Khan (7) and Lomror, leaving the side struggling at 135 for six.

An 85-run partnership for the seventh wicket between Deepak Chahar (22) and Bishnoi brought some respectability to Rajasthan’s total, before Chahar left the scene at 220 for seven after being adjudged leg before to Gowtham. (ALSO READ: Rinku Singh s 150 pushes Uttar Pradesh to 340/7 versus Saurashtra)

Mithun and Gowtham ended the innings with figures of 3/48 and 3/54, respectively. Vinay and Shreyas bagged two wickets each. 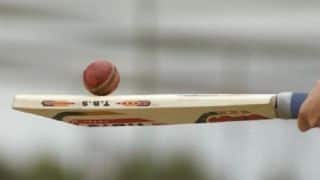