Ranji Trophy 2018-19, Round 8, Elite A, Day 3: Mumbai knocked out after suffering innings and 145-run defeat to Vidarbha

Mumbai needed an "outright win" to stay alive in the coveted domestic competition.

Nagpur: Reigning champions Vidarbha defeated Mumbai by an innings and145 runs in a lop-sided Ranji Trophy 2018-19 Elite A match on Tuesday.

Mumbai needed an “outright win” to stay alive in the coveted domestic competition. But it was their batting that let them down not once but twice at the Vidarbha Cricket Association Stadium as the hosts scripted a memorable win and even gained a bonus point.

The hopes of 41-time Ranji champions to secure a quarter final berth are now dashed and they are out of reckoning to make the last eight.

Even if Mumbai win against Chattisgarh in their last league game, mathematically it is not possible for them to make the last eight as only five teams from combined A and B groups can make it to the quarters, says an insider from Mumbai Cricket Association after the team’s humiliating loss.

Mumbai resumed at their overnight score of 169 for 6 in their first innings. But barring Dhurmil Matkar (62 not out), no other lower-order batsman showed spine and the visitors were shot out for a paltry 252. Off-spinner Akshay Wakhare (5/85) emerged as the hero for Vidarbha in the first essay.

Vidarbha, who had posted a massive 511 on the board, asked Mumbai to bat again.

If Wakhare emerged as Mumbai’s nemesis in the first essay, then slow left-arm spinner Aditya Sarwate sliced through the Mumbai batting in the second innings. Sarwate returned with splendid figures of 6/48 as he proved to be Mumbai’s wrecker in chief in the second essay.

Sarwate had claimed three wickets in the first innings also. The 29-year-old was well complemented by Akshay Wakhare, who took two wickets in the second innings.

For Mumbai, in the second innings, Matkar showed some resistance with a 36-run knock.

Shreyas Iyer failed to convert his start after he walked back to the pavilion on 22. Other batsmen Jay Bista (0), Vikrant Auti (1), skipper Siddesh Lad (6), Shubham Ranjane (1), Aditya Tare (15), Shivam Dube (6) made a beeline to the pavilion as Mumbai began the new year on a disastrous note.

Veteran Wasim Jaffer, who laid foundation of Vidarbha’s massive score with his 178, was adjudged as the Man of the Match.

This is Mumbai’s third largest innings defeat in domestic cricket the other two being innings and 168 runs versus Rest of India in the Irani Cup in 1977-78 and innings and 166 runs versus Gujarat in 1950-51 season. 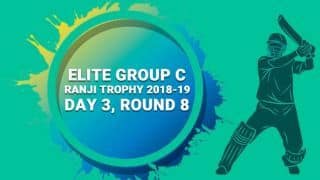