As the bowlers made merry, Solanki and Hooda were the only batsmen who got half centuries 69 and 51 runs, respectively.

Vadodara: On a day when as many as 22 wickets fell on the 22 yards, Vishnu Solanki and Deepak Hooda smashed brilliant fifties to help Baroda take a crucial 111-run lead over Karnataka in their Ranji Trophy 2018-19 Round 9 Elite A match on Monday.

Asked to bowl first, Baroda dismissed Karnataka for 112 before the hosts scored 223 runs, riding on Solanki’s 69 and a 60-ball 51 by Hooda, to take a crucial lead over their rivals.

In the second innings, Karnataka were 13 for 2, trailing Baroda by 98 runs at stumps. Krishnamurthy Siddharth and Karun Nair are batting on 11 and two, respectively at close. Left-arm spinner Bhargav Bhatt picked both the wickets.

As the bowlers made merry, Solanki and Hooda were the only batsmen who got half centuries 69 and 51 runs, respectively.

For Karnataka, they had to be satisfied with captain Manish Pandey being the top-scorer with 43 runs.

Karnataka made a disappointing start as they were 31 for five in 9.5 overs after left-arm pacers Arothe and Meriwala wreaked havoc.

Nischal was cleaned up by Meriwala and Samarth was caught by Mitesh Patel off Arothe, as the visitors began their match on a bad note.

Siddharth and Test discard Nair did not last long either as they fell to Arothe and Meriwala, after scoring four and 12, respectively.

Shreyas Gopal was out first ball that he faced off Meriwala as the Karnataka lad gave a catch to Hooda.

Struggling at 31 for five, Pandey and BR Sharath stitched a crucial 54 runs partnership for sixth wicket.

Sharath was bowled by Bhatt after scoring 30 runs and Pandey, who had smashed a ton in the last match against Chhattisgarh, top-scored for visitors with 43 runs, before he was cleaned up by Tai.

In reply, Baroda began their innings on similar lines, losing two quick wickets Kedar Devdhar (0) and Aditya Waghmode (10) within ten overs. However, Solanki and Hooda sketched 119 runs partnership for third wicket, which gave an impetus to the hosts.

Solanki was later cleaned up by Shreyas, while Shubhang Hegde picked up Hooda’s wicket after he gave a catch to Nischal.

Krunal Pandya and Mithesh Patel did not stay long, departing after making seven and nine respectively. They were sent back by Gopal in quick succession. 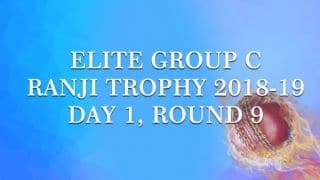 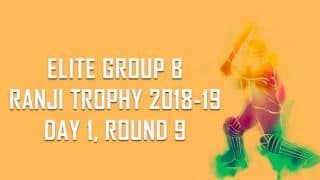