Pankaj Singh, the tall and strapping fast bowler from Sultanpur, Uttar Pradesh, who represented Team Rajasthan with distinction has moved to Puducherry as their third professional for a contract of one year.

Pankaj Singh, the tall and strapping fast bowler from Sultanpur, Uttar Pradesh, who represented Team Rajasthan with distinction has moved to Puducherry as their third professional for a contract of one year.

As per a report in Sportstar Live, the 33-year-old will represent new entrant Puducherry in the upcoming season and his decision to leave Rajasthan after 14 years is to ensure that youngsters got an opportunity to play Ranji Trophy for Rajasthan.

There are many young bowlers in the State and I did not want to block their way. Now, some of them will get more exposure, Singh told Sportstar.

Singh has been a consistent performer in the domestic circuit with 427 wickets to his name in 109 First-Class matches at an average of 25.30. During the 2010-11 and 2011-12 season, in which Rajasthan won and retained the Ranji Trophy, Singh played a vital role picking up 88 in two seasons.

With Puducherry, Singh hopes that he can help inspire youngsters. To be honest, I know that the chances of playing for India are very bleak now. So, I want to prove my mettle here for a new team. This way, I can even inspire a few youngsters, he said as quoted by Sportstar Live.

Singh also represented India playing two Tests against England in England in 2014 series picking up two wickets. He made his ODI debut in 2010 playing a solitary game against Sri Lanka in Harare.

Singh will join Mumbai veteran Abhishek Nayar and Himachal’s Paras Dogra as a professional for Puducherry. 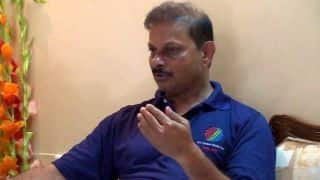 Getting Brendan Taylor, Sean Williams and other seniors back would be good for Zimbabwe cricket: Lalchand Rajput