The team director said that the win in Sri Lanka was a culmination of the hard work the team had put in over the past few months.

Ravi Shastri, whose term as the Indian cricket team director has been extended at least till the ICC World T20 2016 along with the other coaches, has asserted that the style of cricket which his team has played with, will not change for the upcoming home series against South Africa. The series against the mighty South Africans begin on October 2 with the first Twenty20 International. The tour consists of 4 Tests, 5 One-Day Internationals (ODIs) and 3 T20Is. South Africa will be in India for as many as 72 days, as they will be starting the tour with a warm-up game towards the end of September. ALSO READ:  Jeff Thomson: Ishant Sharma and other Indian bowlers lack discipline

Shastri, in an interview published in the official website of the Board of Control for Cricket in India (BCCI) said that he does not want to change the style of cricket which the Indian team has been playing. Indeed, there is a change in approach under the captaincy of Virat Kohli, as India were able to win a Test series in Sri Lanka after 22 long years.

“South Africa are the No. 1 team in the world. We have to play consistent cricket for long periods of time to put them under pressure. That will be the endeavour. Our style of play will not change. If you reflect on our performances in Australia and Sri Lanka, you will see that consistency was the difference between defeat and victory. Sustained brilliance will be the key against the Proteas,” Shastri said. ALSO READ: Sachin Tendulkar, Ajinkya Rahane have similar batting techniques: Steve Waugh

The team director said that the win in Sri Lanka was a culmination of the hard work the team had put in over the past few months.

He said, “These things don’t happen overnight. It is something that has to be inculcated in the system early on and be accepted by everyone in the team. When that starts sinking in and each member of the team has one uniformed thought process, you will start seeing the results. So, you’re absolutely right. The process started in Australia, continued in Bangladesh and carried on to Sri Lanka, as far as Test matches are concerned.”

Talking about the extension of his role with the Indian team, the former cricketer said, “It has given me immense job satisfaction. It has been the biggest challenge for me in all the years I have been involved in the game in whatever capacity. My willingness and desire to carry on in this role stems from the fact that I have got a great team with me — a great bunch of players and an amazing support staff.” 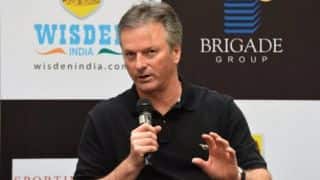