Rohit Sharma will lead in the three matches against West Indies before Virat Kohli returns to skipper India in Australia.

Rishabh Pant and Shreyas Iyer have been named in India’s 16-man Twenty20 international squad led for the home games against West Indies and the upcoming tour of Australia next month, but MS Dhoni’s name is missing.

Shahbaz Nadeem, the uncapped Jharkhand spinner, has been handed a maiden call-up for the West Indies series. Rohit Sharma will lead in the three matches versus West Indies before Virat Kohli returns from another rest to captain India for the three fixtures in Australia.

Dhoni’s absence will raise questions over his future in India’s T20I plans. His scores this year are 16, 52*, 12, 11 and 32* but his wicketkeeping has remained excellent. Former India wicketkeeper MSK Prasad, head of the BCCI selection panel, did not rule out a return for Dhoni.

“Dhoni’s not going to play the six T20Is because we’re looking at the second wicketkeeper’s slot. It is not the end of Dhoni in T20Is. Murali Vijay had been dropped from England, but he went back to counties and performed and showed his intent,” said Prasad in Pune on Friday, venue for the third ODI against West Indies.

From the last T20I squad that toured England, Deepak Chahar, Siddarth Kaul, Suresh Raina and Axar Patel have been dropped. Krunal Pandya has been retained, having been part of the squad in England without getting a game, and Washington Sundar has returned. Hardik Pandya remains sidelined with the back injury he suffered during the Asia Cup in September.

Pant returns to the T20I setup having played the last of his four games during the Nidahas Trophy in March, which India won under Rohit. He has scored 73 runs in those four chances with a best of 38. Iyer has played six T20Is between November and December 2017, and has been added on the back of some strong scores in List A cricket for Mumbai this season.

Nadeem, 29, has been on the fringes of selection for several years. The left-arm spinner has taken 89 wickets in 109 career T20 games. During the Vijay Hazare Trophy in September, he claimed the best figures in the history of List A cricket.

Dinesh Karthik has been retained, as has Shikhar Dhawan despite some average scores in the format. Jasprit Bumrah is also primed for his first T20I since June, named as one of four pace bowlers alongside Bhuvneshwar Kumar, Umesh Yadav and Khaleel Ahmed. Rajasthan left-arm pacer Khaleel made his ODI debut in the Asia Cup last month but is uncapped at T20I level.

Rohit has been the BCCI’s go-to man to lead India when Kohli has been rested. He led India to a 3-0 sweep of Sri Lanka last December, scoring the joint-fastest T20I century during the second game, then in the third T20I in South Africa in February, which India also won, and captained them to the Nidahas Trophy title in Sri Lanka the following month. 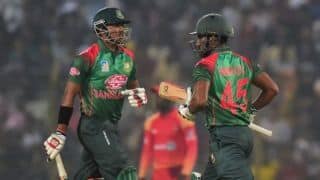