Young Rishabh Pant is unperturbed by chief selector MSK Prasad's less-than-flattering views on the next line of wicketkeepers to fill the big boots of Mahendra Singh Dhoni, saying his only job is to score runs.

Young Rishabh Pant is unperturbed by chief selector MSK Prasad‘s less-than-flattering views on the next line of wicketkeepers to fill the big boots of Mahendra Singh Dhoni, saying his only job is to score runs.

Though not in the best of form in the ongoing Ranji Trophy season, Delhi’s 20-year-old Pant is considered a bright prospect and has shown his capabilities in the not-too-distant past.

“I should not worry about all this. I don’t think about all this at all. My job is to perform, score as many runs as possible,” Pant said at the end of opening day’s play against Vidarbha in the Ranji Trophy finals.

But it is precisely the runs that Pant has not been able to score, captaining Delhi this season.

“There is no comparison and I don’t see any wicket- keeper, who can even come close to him (Dhoni) in world cricket, leave alone Indian Cricket,” Prasad had said, more or less sealing the fate of all young keepers such as Pant and Sanju Samson till the 2019 World Cup.

Pant, however, chose to move away from the topic and spoke about his experience of leading a Delhi team, that includes seasoned campaigners such as Gautam Gambhir.

Pant was dismissed for 21 today but centurion Dhruv Shorey thought there was nothing wrong with his talented team-mate’s game at the moment.

Shorey, who stood out with an unbeaten 123, praised the natural ability of batsmen such as Pant and Himmat Singh, who contributed a fluent 66.

“We need to back our games. Rishabh and Himmat are natural strokemakers, especially Rishabh. You can’t change your game immediately. Everyone has seen him play, I don’t need to say anything. Rishabh is a brilliant stroke-maker,” Shorey said after the end of day’s play.

Shorey, who got out a few times after making 70s and 80s, was delighted that the century-plus knock has come at the biggest stage.

Shorey found himself in the middle in the first over of the match, after debutant seamer Aditya Thakare sent back Kunal Chandela with an outwinger, but he showed steely resolve to survive the initial testing spells before opening up.

Asked what he felt about the knock and the day’s proceedings, Shorey said, “It is all about staying in there, it is all about taking your time, and on these wickets it is very important that you take your time because if you don’t and go for your shots then most probably you would get out.

“So, I took my time initially, I gave respect to the bowlers, and after that it was my session. The situation is not too bad. But we could have done better we lost two extra wickets. But still we can revive and we do have a long tail.” 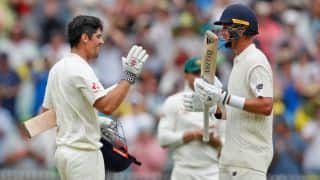