Corey Anderson and Rohit Sharma are looking good in the middle for Mumbai.

After losing two early wickets, the Mumbai Indians have slightly recovered to post 73 runs from the first 12 overs of their innings against the Chennai Super Kings in this crucial 13th match of the Indian Premier League (IPL) 2014 at Dubai. Corey Anderson and Rohit Sharma have formed a strong little partnership, and are starting to find the big shots going for them.

Mumbai started off slowly, but are now getting the boundaries. The move to send Anderson up the order might have worked well for Mumbai as he is looking a better and more confident batsman after spending some time in the middle.

Anderson survived a close call in the 11th over of the innings when he skied a shot, but it fell in no man’s land. Dhoni will be hoping his bowlers can break this partnership whichnis threatening to take Mumbai to a strong total.

Earlier in the innings, after winning the toss and electing to bat first, Mumbai Indians made a poor start, as they lost Michael Hussey in the second over of the innings. He was bowled by Ben Hilfenhaus.

Chennai started the innings with Ishwar Pandey. He gave away just two runs from the first over. In the second over, Aditya Tare greeted Hilfenhaus into the attack with two glorious boundaries through the offside.

Hussey’s dismissal saw a change in the batting order of Mumbai as they promoted New Zealand’s big-hitting all-rounder, Corey Anderson to No 3. On the other end, Tare continued his assault as he struck Pandey for two more glorious fours in the third over.

MS Dhoni didn’t waste any time in introducing Ravichandran Ashwin into the attack, as the off-spinner came on to bowl the fourth over of the innings. The offie started off well, conceding just a couple of runs from his first over. Dhoni has shuffled his bowlers so far, as he introduced Mohit Sharma into the attack for the fifth over. Mohit instantly reaped him the rewards as he got the prized wicket of Tare. The right hander tried to slog him over mid-on, but ended up giving an easy catch to Suresh Raina.

The fall of the second wicket has brought the Mumbai captain, Rohit Sharma to the centre. 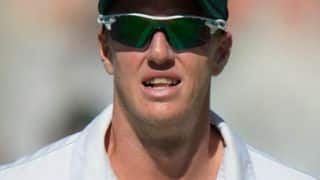