The International Cricket Council (ICC) has punished Sarfraz for breaching its anti-racism code for participants. The wicketkeeper-batsman is missing the rest of the South Africa tour where Pakistan are to play two more ODIs followed by a three-match T20I series.

“The incident was initially reported by Ranjan Madugalle of the Emirates Elite Panel of ICC Match Referees after he conducted initial investigations and spoke to both players after the match. Following a further investigation, the ICC General Counsel, Iain Higgins, then determined that the player had a case to answer under the Code, and the player was issued with a charge notice on 26 January,” ICC said on Saturday.

Shoaib Malik has been named as the stand-in captain for the Sunday’s ODI against South Africa. “We wanted him [Sarfraz], but the incident… we all know what has happened. I don’t want to comment about it. But they’ve given me this opportunity, and I want to do my best,” Malik said.

On Friday, Sarfraz had posted a picture of his meeting with Phehlukwayo claiming he had apologised in person.

Phehlukwayo and Rassie van der Dussen combined to add 127 runs in quick time after the Proteas were in a spot of bother at 80/5 in the 15th over while chasing a target of 204 runs. The partnership began to frustrate the Pakistanis and Sarfraz let his emotions get the better of him.

The incident occurred in the 37th over of the South Africa innings when Phehlukwayo was facing Shaheen Afridi. After taking a run and heading to the non-striker s end, the Pakistan wicketkeeper passed said: Abey kaale, teri ammi aaj kahaan baitheen hain? Kya parwa ke aaye hai aaj? (Hey black guy, where s your mother sitting today? What prayer has she said today?)

ICC Chief Executive David Richardson said, “The ICC has a zero-tolerance policy towards conduct of this nature. Sarfaraz has promptly admitted the offence, was regretful of his actions and has issued a public apology, so these factors were taken into account when determining an appropriate sanction.”

As per Article 7.3 of the Anti-Racism Code, Sarfaraz will also have to undergo an education programme to promote the understanding and awareness of issues directly relevant to the offence that he has committed. The ICC will work with the PCB to determine when and how this should take place. 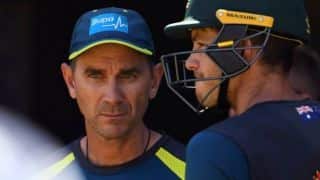