Olivier made Azhar his bunny by dismissing him four times in three Tests.

South African fast bowler Duanne Olivier has offered a sympathetic word for Pakistan batsman Azhar Ali, whom he dismissed four times in three Tests during the recent 3-0 sweep at home.

The 26-year-old Olivier was named Player of the Series for claiming 24 wickets at an average of 14.70 and a strike-rate of 22.00, of which four were of Azhar. The one-time Pakistan captain was dismissed in both innings of the first Test at Centurion and once each at Cape Two and Johannesburg in a series in which he averaged 9.83.

Shame, I feel sorry for him, he had a tough tour, Olivier said of Azhar s problems in the Tests. The (surfaces) helped quite a bit. (I surprised myself) quite a bit, to be honest. I do like to bowl short, and to do it for three Tests, I m very proud. I m very happy that my body allowed me to do that.

Stand-in captain Dean Elgar, who replaced the suspended Faf du Plessis, had a close view of Olivier s pace and bounce and mused that it was not pleasant to face.

I faced him in the four-day game before the series started and it was quite uncomfortable. I knew we d be teammates the next week, but I didn t know if I wanted to speak to him, Elgar remarked.

South Africa now play Pakistan for five ODIs starting Saturday at Port Elizabeth. Olivier is not part of the ODI squad, and asked about the 2019 ICC Cricket World Cup he replied: I m not thinking that far ahead; I take it day by day. I m going back to my franchise and see what happens there and just contribute towards the team; that s the most important thing. 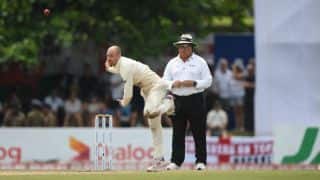