Young batsmen Josh Richards and Marques Ackerman made the touring Pakistanis toil on the first day of a three-day match against a South African Invitation XI  at Willowmoore Park on Wednesday.

Opening batsman Richards, who turns 20 on Thursday, failed by two runs to notch his fourth representative century in a row as he made 98, while Invitation team captain Ackerman, 22, scored 103 not out before declaring shortly before close of play. The tourists were two for no wicket at the close.

Richards came into the match on the back of two first-class centuries and one List A hundred for the Gauteng provincial team, which plays in South Africa’s secondary domestic competition.

The match is not a first-class fixture because both teams can use up to 15 players, with 11 batting and 11 bowling.

Fast bowler Mohammad Abbas, expected to be a key figure in a three-match Test series starting on December 26, did not bowl. He faces a struggle to be fit for the first Test in Centurion. 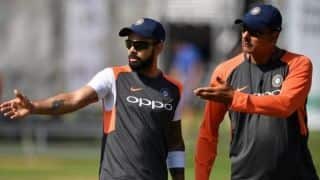 Virat Kohli, Ravi Shastri need to ensure every player in the team is made to feel wanted: VVS Laxman