Arthur is confident of an in-form Pakistan being able to register their maiden Test-series win on his own soil.

Of the many things Mickey Arthur carries on his bucket list as coach, one which tops his priority is to lead Pakistan to a series win over South Africa, the country where Arthur was born. Upon Pakistan’s arrival in South Africa for a long tour that includes three Tests, five ODIs and one T20 international, Arthur is confident of an in-form Pakistan being able to register their maiden Test-series win on his own soil.

“I’ll make no secret of it, I’d love to come back here with a Pakistan team that is very talented, and win,” Arthur said. “We’ve come here with a very exciting young team. It’s a team that’s starting to gel well together. We’ve played unbelievable white-ball cricket. Our 50-over team is on the up, our T20 team has been exceptional, but we sit trying to build up a Test team. It’s a young Test team at the moment, but a very exciting Test team. We really think we have a good chance out here.”

ALSO READ: Sarfraz should be removed as Test captain

The first meeting between the two sides is the Boxing Day Test at Centurion, and despite losing the Test series 1-2 to New Zealand, Arthur is not willing to let that result dent the confidence of the team. Pakistan may have been a bit dodgy with their batting, but their bowling front has always shown spark. Although Arthur feels the unit is capable of surprising South Africa if they perform to its potential, the bowlers will need support from the batsmen.

“They (South Africa) are a good batting line-up, they are, but we’re a very good bowling line-up. So we do feel we can make some inroads there, for sure. Our bowling attack is incredibly skilful in all conditions. The one thing we do know is that we’ve got a bowling attack that can take 20 wickets comfortably. Our challenge is getting ourselves to 350, 400. If we can get runs on the board, we know that we can get 20 wickets and we can bowl in all conditions,” Arthur said.

Arthur was quick to acknowledge the fact that that South Africa possess an equally strong bowling line-up with the likes of Dale Steyn, Kagiso Rabada and Vernon Philander boosting the pace attack, while Keshav Maharaj leading the spin attack. That said, Arthur feels Pakistan’s batting has shown tremendous improvement, while stressing that Pakistan bat better outside the UAE.

“You don’t have to be a rocket scientist to work out that the South African bowling attack is exceptionally good. We know that that’s going to be a real challenge,” Arthur said. “I’ll make a statement now, that our young batting group now bat better outside the UAE than they do in the UAE. There’s some very talented young batsmen there. They don’t stand on leg stump anymore. Our batsmen get to off stump, they cover the bounce, they cover the pace and they cover the swing. And they play very well in these conditions.” 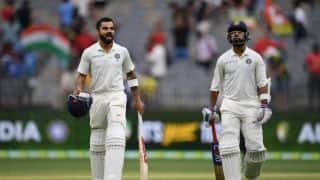