Mulder, with the experience of seven ODIs, has recovered from ankle injury.

South Africa have added the allrounder Wiaan Mulder to their squad for the deciding fifth ODI versus Pakistan at Newlands on Wednesday.

Mulder, capped in seven ODIs, last played for South Africa in September before he was sidelined with an ankle injury. Having proven his fitness and form with ten wickets in three first-class matches this month, and a century last week, the 20-year-old has been ushered back in. (READ MORE: 5th ODI: Heated series set for decider at Newlands)

South Africa and Pakistan are locked at 2-2 in the ongoing ODI series, with the hosts not having lost a bilateral series since February 2018.

In seven ODIs, Mulder has taken seven wickets at an average of 36.42 and economy rate of 5.79.

Mulder last week was named in South Africa’s T20I squad too, for the three-match contest with Pakistan. 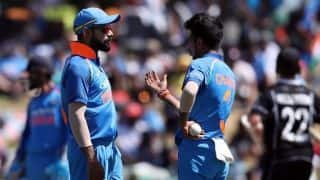