Faf du Plessis ground out a century and put South Africa in a commanding position on the second day of the second Test against Pakistan at Newlands on Friday.

The South African captain shared a fifth wicket partnership of 156 with Temba Bavuma (75), which sapped the energy from the Pakistan bowlers and fielders. Wicketkeeper Quinton de Kock benefitted from the wearing down of the bowlers, hitting a breezy 55 not out off 71 balls late in the day.

Du Plessis, out for a pair during South Africa’s six-wicket win in the first Test in Centurion, showed patience and resolve in an innings lasting six minutes short of six hours. He faced 226 balls and hit 13 fours.

He gave a chance on 96 when Sarfraz Ahmed, the Pakistan captain and wicketkeeper, could not hold a faint glance down the leg side off Mohammad Abbas.

Abbas bowled a probing line and length but had a largely luckless day. It started well enough when he bowled Hashim Amla with his fifth delivery of the morning with a ball which deviated sharply off a crack outside the right-handers’ off stump and sent the leg stump flying.

Abbas appeared to have had Bavuma caught by Azhar Ali at first slip when the batsman was on three. The on-field umpires gave a “soft” signal of out but asked for television umpire Sundaram Ravi to check whether there had been a clean catch. Ravi decided the ball had made contact with the ground while the catch was being taken.

Shortly afterwards, Abbas unsuccessfully sought a review when he thought Bavuma was leg before wicket. He later won an lbw decision against Bavuma only for the batsman to be reprieved on review, with replays showing the ball just going over the top of the bails.

The left-armed Mohammad Amir beat the outside of Du Plessis’s bat on several occasions but Du Plessis batted on doggedly, prepared to wait for rare loose deliveries before playing attacking shots.

Bavuma, who hit a solitary Test century against England three seasons ago, made his 13th half-century before being caught behind off left-armer Shaheen Shah Afridi, bowling around the wicket. Bavuma faced 162 balls and hit ten fours.

Afridi was the most expensive of the Pakistan bowlers, conceding 112 runs, but he picked up three of the four wickets that fell during an attritional day, including that of Du Plessis on review after umpire Joel Wilson failed to detect a faint edge. 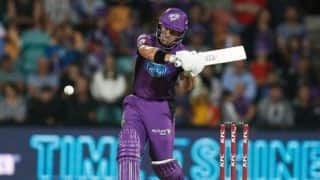