The Johannesburg match will be the showpiece Pink ODI and history backs the Proteas.

After a much-improved performance with the bat, specially from Imam-ul-Haq, who smashed his fifth ODI century, Pakistan will look to close in the gaps with the ball, something there were unable to do in the previous rain-curtailed tie at the Centurion which the hosts won by 13 runs (DLS method), and level the series in the fourth and final ODI against South Africa at the Wanderers in Johannesburg on Sunday. (ALSO READ: 3rd ODI: Reeza Hendricks trumps Imam-ul-Haq in DLS win)

In the previous match, Pakistan had set an imposing target of 318 and had reduced the Proteas to 79/2 and were firmly in control, but rain interruption, indiscipline bowling and a fine 108-run partnership between Reeza Hendricks and Faf du Plessis took South Africa to the finish line with ease.

Pakistan have shown signs of improvement in their batting and the Wanderers pitch being batting friendly will help their cause. However, what would concern Sarfraz Ahmed and the think-tank would be the performance of the bowlers with none of them able to pick wickets at important junctures. (ALSO READ: Sarfaraz meets Phehlukwayo to apologise for racist remark)

The Johannesburg match will the showpiece Pink ODI and history backs the Proteas. Since the inception of the Pink ODI in 2013, South Africa have never lost an ODI in pink and boast of a 6-0 record.

South Africa will be hoping they can clinch a hard-fought series, but with rain and thunderstorms predicted throughout the day, chances that it be a repeat script of what happened at the Centurion on January 25. Let s wait and watch.

Where: The Wanderers, Johannesburg

Where to watch: Sony Ten 1 or you can follow LIVE action on CricketCountry

With a flat track on offer at Johannesburg, chances are that South Africa may look to add more firepower to the seam department with allrounder Dwaine Pretorius, who has played domestic cricket at the venue. The hosts may also look to swap Tabraiz Shamsi for Imran Tahir, who has a decent record at this ground with 7 wickets at 22.57.

Fakhar Zaman, currently going through a poor form, may roll the carpet for Shan Masood s ODI debut. Faheem Ashraf’s seamers could put him ahead of Imad Wasim.

Hashim Amla needs 89 runs mroe to reach 500 runs at the Wanderers. In doing so, he will enter the top five of the list of ODI run-scorers at a ground where he is also just four runs shy of the record for most Test runs.

“Pink Day will once again demonstrate the remarkable power of how sport can mobilise support for a cause that affects millions of people around the world.” Cricket South Africa chief executive Thabang Moroe 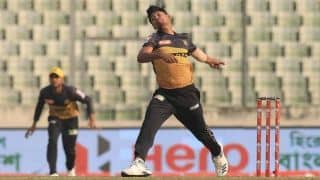