From losing three of their first four Test matches of the year, and drawing the other, England have come a long way.

Joe Root s team holds an unassailable 2-0 lead in the three-Test series against Sri Lanka after Jack Leach s five-wicket haul starred in the second Test at Pallekele, and should they win the last match at the SCC it will be their ninth win in ten Tests.

ALSO READ: Rare away whitewash the target for Joe Root at SSC

It s been quite a journey for the group of players, the Test team. We did start the year in difficult circumstances and weren t playing our best cricket but we ve found a way to get to a really strong position, said Root on Thursday. There s been a few changes along the way but as a group we ve found a way we want to go about things. It s been really pleasing that everyone has bought into that and given us a great opportunity to hopefully win this series 3-0.

England lost the Ashes in Australia 0-4 and were then beaten by New Zealand, their low highlighted by a total of 58 all out in Auckland. They drew 1-1 with Pakistan at home followed by beating top-ranked India 4-1.

ALSO READ: England dare to go where only once-mighty Australia have in Asia

Now, remarkably, Root s team will fancy a slice of history when they meet Sri Lanka at the SSC on Friday, for no other non-Asian team apart from Australia – in 2002-03 and 2003-04 – has ever swept a Test series in Asia.

That would be massive for this team, said Root. One area where we ve not been as good as we can be in the past is winning back to back games and this would be a great opportunity for us to show we re becoming more consistent, that we re finding ways of winning and playing good cricket for longer periods of time. It would be a brilliant achievement which would fill us with a huge amount of confidence. 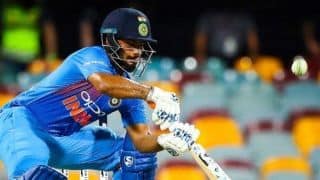 Rishabh Pant has to change his shot selection: Sourav Ganguly