With rain expected, New Zealand's return to cricket for the first time since their epic World Cup final may have to wait.

For the first time since the heartbreak of the ICC Cricket World Cup final, New Zealand are back in action. Their target is Sri Lanka, whom they hosted late last year and beat them 1-0 in Tests. Despite playing at home, Sri Lanka face the possibility of a scare. They were blanked 0-3 by England last year at home, while New Zealand aced the sub-continent conditions of the UAE and beat Pakistan. Add the two factors and you can sense who has the edge.

Who hasn’t wanted to see New Zealand make their return to international cricket? But the wait might just prolong a little longer. The practice match ended in a draw after rain washed out the final day and Galle predicts a similar patterns with rainfall expected across all five days.

Besides the incentive of toppling Sri Lanka on their home soil, New Zealand, provided they can win the series 2-0, will top the ICC men’s Test rankings. Currently on 111 points, New Zealand are second on the table and a clean sweep will see them leapfrog India as the No. 1 side. Having already made their second straight World Cup final, New Zealand start their World Test Championship journey, with an aim of being one of the final two teams to book a date at Lord’s in 2021.

Sri Lanka have gone through a bit in the last couple of weeks, the highlight being the return of Dinesh Chandimal. The coaching staff has undergone quite the upheaval with Chandika Hathurusingha dropped midway through his three-year-contract and former fast bowler Rumesh Ratnayake replacing him on an interim basis. Also returning to the Test fold is Angelo Mathews and together with Chandimal is expected to carry Sri Lanka into its next phase.

Weather: Conditions is Galle look grim with rainfall expected on all five days

Chandimal and Mathews will walk back into the team and it will be a toss-up between Niroshan Dickwella and Kusal Perera to keep wickets. Lahiru Kumara is expected to share the new ball with either Suranga Lakmal or Vishwa Fernando. Akila Dananjaya’s remodelled action almost promises to grab attention and so will Lakshan Sandakan’s chinaman.

Two pacers in Trent Boult and Neil Wagner and two spinners in Todd Astle and Ajaz Patel appears to be a sure-shot selection for New Zealand with Colin de Grandhomme filling in for a third pace option.

– The two teams have not played Tests in Sri Lanka since 2012, when New Zealand won the second Test at the P. Sara Oval to draw the series following a heavy defeat in Galle

“New Zealand will be tough to beat. We have got guys who were not part of the series in South Africa, so we have got to make some tough calls.” – Sri Lanka skipper Dimuth Karunaratne

“They are a strong team. They will come into this series with lot of confidence behind them after what happened in South Africa.” – New Zealand coach Gary Stead 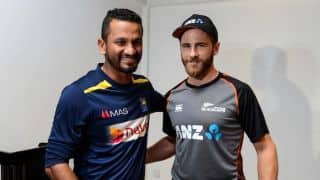