New Zealand’s last Test match was in early March, and from the time their home season ended later that month, Boult has played in the IPL and then the ICC Cricket World Cup 2019 where the Black Caps reached the final.

Speaking to ESPNcricinfo, Boult said the switch back to Tests was a welcome one. “If we were getting back into one-day cricket it might drive a few of us mad after the amount we’ve played over the last little while,” he said. “I think it’s going to be a big positive to get back in the saddle and crack on with some Test cricket. It’s a slightly different squad so think it will be good for everyone.”

New Zealand reunite this week for the first time since the World Cup final on July 14, to fly to Colombo for a tour of Sri Lanka where they begin their first assignment of the World Test Championship.

After the tour of Sri Lanka, New Zealand host England for two Test matches and five T20Is in October-November. Those two Tests are not part of the World Test Championship, because the series was scheduled before the new competition was created. Following that series, New Zealand travel to Australia for three Tests and then return home to host India.

Boult is looking forward to this busy calendar of cricket with hopes that New Zealand, ranked second in Tests, can usurp top-ranked India and also win the World Test Championship.

“It’s definitely exciting for us, there’s a big summer schedule coming up, against some quality opposition and I know the guys are looking forward to it,” he said. For me, growing up as a kid, to potentially play a Boxing Day Test in Australia has always been a massive motivator so hopefully everything goes well and I can get on that stage. It’s great for New Zealand cricket, a lot of people are talking some positive stuff about the game back and there’s a lot of pride in the side so it’s just great for a game in a small country like this.

“We’ve been playing some good [Test] cricket over a very long period of time, there’s a reason that we ended up at the right end of the rankings. [The final] is probably not something we are setting out right now to achieve, but through toiling away and playing the style of cricket we know works well hopefully that will give us reward down the track. The potential to be in a Test final at Lord’s in a couple of years’ time is definitely a pretty big stage so we’ll be driven by that.”

The Test series in Sri Lanka starts on August 14. In 15 Tests played in Sri Lanka dating back to 1984, New Zealand have won four, lost six and drawn five. 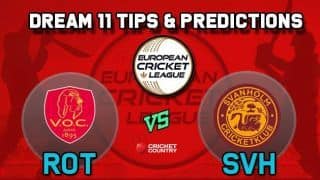