Led by batsman Dimuth Karunaratne – who on Wednesday was named captain despite not having played an ODI since 2015 – Sri Lanka’s World Cup squad comprises four specialist batsmen, one wicketkeeper, six allrounders, three fast bowlers and one specialist spinner in Vandersay.

The Sri Lanka selectors considered the form of players in the ongoing Inter-Provincial Cricket Tournament, apart from international performances this year. The top two run-getters of the domestic one-day competition, Angelow Mathews and Thirimmane, have been picked as has Mendis whose all-round impact has been valued.

Thirimanne, who has not played ODI cricket since December 2017, recently scored a century to push his claims for a recall. Mathews topped the Inter-Provincial Cricket Tournament run-chart with 227 from four innings to prove his fitness while Mendis scored averaged over 41 with the bat and took six wickets.

Siriwardana, 33, last featured for Sri Lanka in an ODI in October 2017 as well.

The wicketkeeper-batsman Kusal Perera has been included, after being passed fit this week after he returned from South Africa with a hamstring injury.

Former captain Dinesh Chandimal, who led Sri Lanka until February before he was dropped for the South Africa tour, has not found a place.

Sri Lanka have not won a single ODI in 2019, having lost three games in New Zealand and five in South Africa. 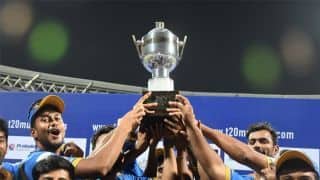