England’s epic win over New Zealand at Lord’s is being called as the greatest ICC Cricket World Cup final in history. After 612 deliveries, both teams finished on equal footing in terms of runs scored and ultimately. England lifted their maiden ODI world cup trophy on the basis of having scored more boundaries than their opponents.

After opting to bat first at the Lord’s, New Zealand seemed to have posted 241/8 which seemed like a middling total. However, their bowlers stepped up before Ben Stokes brought back his team back into the contest, forcing a tie. The contest went into Super Over and there too both teams finished on 15 runs each.

Here are few of the reactions after the sensational finale:-

A game that ebbed and flowed from the 1st ball to the 612th!
Feel for New Zealand 🇳🇿 who did everything that England 🏴󠁧󠁢󠁥󠁮󠁧󠁿 did and still fell short.
Congratulations to England.#CWC19 #NZvENG @ECB_cricket @BLACKCAPS pic.twitter.com/FlEJb0NfId

Neither Team deserved to lose that .. What a day for Cricket .. that is how it inspire a new generation of cricketers .. #CWC19

What a final it was .. the best in last 20 years and still level at super over … Kane Williamson..what an ambassador of the game .. well done eoin morgan and england pic.twitter.com/G5B96PGycz

What an amazing match of Cricket. Nail biting stuff at an iconic venue…

This game will go down as one of the best matches in history. Congratulations to @englandcricket on your maiden @cricketworldcup title. Never be down @BLACKCAPS, you fought like champions. #CWC19Final

That’s a game of cricket!

The Duke of York, on behalf of The Queen, presents the @englandcricket team with the World Cup Trophy at the @HomeOfCricket 🏴󠁧󠁢󠁥󠁮󠁧󠁿 pic.twitter.com/WeJKj4KBHL

Sport.. the best form of theatre/entertainment.. their are no scripts involved here…!!!

What a game. Cricket has been the winner. Really tough on the @BLACKCAPS but they can be very proud . Many congratulations to England on winning the Cricket World Cup in the most dramatic way. #EngvsNZ

This World Cup has genuinely been about Stokes the batsman. Having played a minimal role with the ball, Stokes’ bat has created ripples equivalent to Thor’s Mjolnir and Captain America’s shield. In professional wrestling, athletes, in a bid to stage a comeback use steel chairs to gain momentum and at times, even take undue advantage. 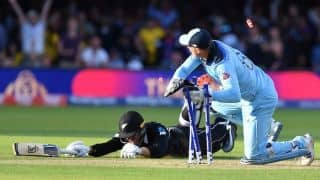 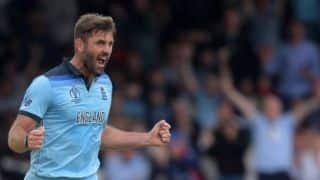