Chauhan made this demand following the Pulwama terror attack which killed over 40 CRPF jawans.

While the state cricket bodies in India have taken down photos of former Pakistan skipper-turned-Prime Minster Imran Khan and the other Pakistan cricketers, ex-India cricketer Chetan Chauhan has called for India to exert pressure on the International Cricket Council (ICC) to throw Pakistan out of the 2019 ICC Cricket World Cup, which kicks off in England on May 30, in the wake of Pulwama attack. The terror attack killed over 40 CRPF personnel in Jammu and Kashmir last week. (ALSO READ: ICC clarifies India-Pakistan match at ICC World Cup 2019 will go ahead as planned)

A number of Indian cricketers have offered help to the families of the martyred CRPF jawans in Pulwama attack. Vidarbha too donated the entire amount of the prize money which they received for winning the Irani Cup. (ALSO READ: Irani Cup champions Vidarbha donate prize money to families of martyred CRPF jawans in Pulwama attack)

Chauhan, who is the current UP Cabinet Minister, said that India shall push ICC to throw Pakistan out of the World Cup 2019.

“If Pakistan do not play the World Cup, it won’t make any difference. If India do not play, the ICC will suffer losses. India bring in 65 to 70 per cent of the sponsorship,” added Chauhan. (ALSO READ: Mohammed Shami donates money to families of martyred soldiers in Pulwama attack) 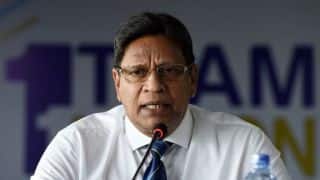