Humaira Tasneem, who wears a hijab said she is pretty sure there are girls out there who wear a hijab and don’t come to play cricket because of it.

Humaira Tasneem, UAE Women’s cricket captain has the belief that her taking to the game will also motivate other girls from the nation. Tasneem plays cricket wearing a hijab. She said that when she first started out, there was a feeling inside her that said what would people think and say seeing her wear a headscarf and play? But nothing of that sort actually took place. On the other hand, people said that it was great to see her play wearing the hijab. She further feels that no one is so narrow minded that they will have any issue with her playing the game wearing her scarf. LIVE CRICKET SCORECARD:  Kolkata Knight Riders vs Delhi Daredevils , 2nd T20 Match, IPL 2016

Tasneem was quoted by thenational.ae saying, “When I was young I didn’t wear the scarf to play. When I first did I wondered if people would ask why I was wearing it, but nothing like that ever happened. It is a Muslim country so people saw me wearing a hijab and said ‘That’s great’. I don’t think anybody would be so shallow that they would have an issue with it. Nobody does.” GCC T20 women’s tournament: UAE captain happy to inspire team

“I’m pretty sure there are people hidden out there who are not playing cricket because they think a hijab means they could not play. But it is fine. When we had the Gulf Cup [a tournament UAE won in December] felicitation, one of the girls came to me and said: ‘I hope I can be like you one day’. That felt so good. She was wearing a hijab and she said: ‘I want to be a cricketer, just like you’. If people see any Hijabi playing sports, it must help. I’m pretty sure there are girls out there who wear a hijab and don’t come to play sport because of it.” READ: UAE women beat Qatar women in GCC T20 women’s tournament final; defend title

Meanwhile, development manager who takes care of the sport at the foundation level Andy Russell said, “That will provide a chance to get some stats on each player. Throughout the summer we will bring them all together again, for training throughout the three months. It gives them some sort of structure, and something to do every month. In the past it was from tournament to tournament, and that could be one year at a time. We wanted to get away from everyone training together because that is not really how you grow the game. This is the first step towards getting the players to enter more leagues.”

The flamboyant and extrovert Ravi Shastri speaks about his young days 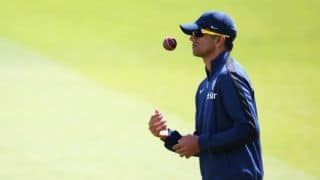