Kohli came in at the fall of Shaw with score on 96 in 20.3 overs, and the Indian skipper put on a stand of 73 runs for the third wicket with Pujara

After day one of the only tour match for India against Cricket Australia XI, ahead of the four-match Test series against Australia, at the Sydney Cricket Ground was washed out, CA XI won the toss on day two and put Indians in to bat. Young opener Prithvi Shaw impressed with a 69-ball 66 run-knock while skipper Virat Kohli, fresh off his match winning 61 not out in the third T20I against Australia to level the series, hit 64 off 87 balls.

Kohli came in at the fall of Shaw with score on 96 in 20.3 overs, and the Indian skipper put on a stand of 73 runs for the third wicket with Cheteshwar Pujara. Pujara fell to 26-year-old Luke Robins – clean bowled – for 54. Kohli then took the Indians total past the 200-run mark and during his 87-ball stay, hit seven boundaries and a six.

But he fell to unheralded 19-year-old pacer Aaron Hardie, when the skipper popped a return catch to the bowler.

Born in Bournemouth, England, Hardie has played all his cricket in Perth and is regarded as one of the brightest prospect for Western Australia. He has captained the state sides at the u-17 and u-19 level and was a replacement player in Australia u-19 squad for the 2018 World Cup, which was won by Shaw s India u-19 team.

And what is interesting is Hardie, yet to make his first class debut, has a knack of scalping big players. Last year, he removed England Test captain Joe Root and James Vince in the same over in England s tour game.

Earlier in the day, opening the batting, Shaw lost his senior partner KL Rahul early for 3 to Jackson Coleman but found support in Pujara. The duo added 80 runs for the second wicket before Shaw fell to Daniel Fallins.

Kohli s departure brought Ajinkya Rahane and Hanuma Vihari to the middle and the duo put on 81 runs for the fifth wicket, before Vihari was scalped for 53 by part-time leg-spinner and Australia international D Arcy Short. Rahane, who then went past the 50-run mark was joined by his Mumbai teammate Rohit Sharma in the middle. 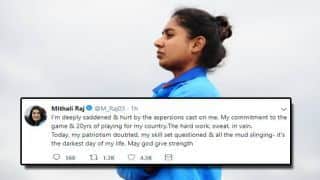