Royal Challengers Bangalore lost the wicket of Chris Gayle early on against Kolkata Knight Riders in Indian Premier League (IPL) 2014.  It was Yogesh Takawale and Virat Kohli who tried to up the ante in the middle overs of the innings. Kohli as usual played with utmost when he flicked Vinay Kumar the medium pacer for a boundary. Yogesh Takawale smashed a six off Vinay Kumar’s bowling as well. They need both to stitch a fine partnership, as they are chasing a  monstrous score on the board.

Earlier, For Kolkata, both Morne Morkel and Umesh Yadav bowled well. Yogesh Takawale too cllected a boundary in the fifth over of their innings. Ryan ten Doeschate and Manish Pandey then made a mess of a catch by colliding. It meant Yogesh Takawale had a life.

Earlier, Kolkata lost early wickets, while playing in a key a game against Bangalore.  But Robin Uthappa and Shakib Al Hasan helped them to recover and reach 195 for the loss of four wickets on the board. Gautam Gambhir, Manish Pandey and Yusuf Pathan were out during the early part of their innings. Yusuf did play a few eye-catching shots, but then got run out. IPL 2014: Restriction on fireworks one of many reasons to shift final, says Ranjib Biswal 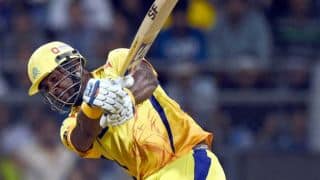