Wright will bring down the final curtain on his career on Saturday, September 7, turning out for Uppermill, near Oldham, against Pennine League side Springhead.

Cecil Wright‘s name will not rank alongside West Indies legends Viv Richards, Gary Sobers and Frank Worrell, but for longevity he outranks them all. The fast bowler known affectionately as ‘Cec’ has announced he will retire in two weeks’ time at the ripe old age of 85

Wright, who in his heyday represented Jamaica against Barbados, lining up against Sobers and Wes Hall, moved to England in 1959 and launched a career as a professional in the Central Lancashire League for Crompton.

After three years he decided to stay on in England and settled down after meeting his future wife Enid, then having a son.

Wright, who also played with Richards and Joel Garner, another of the great West Indies pace attack of the late 1970s and early 1980s, has taken over 7,000 wickets during a career spanning more than 60 years. At one point he took 538 wickets in five seasons, averaging one every 27 balls.

But finally, even he has accepted that the time has come to pull up stumps on his career. “I wish I knew the reason for my longevity, but I couldn’t tell you what it is,” he told The Daily Mirror, who estimated that he had played in over two million games.

He once attributed his staying power to his love of traditional no frills Lancashire food such as hot pot. “To be honest I eat anything that’s going but I don’t drink much, just the odd beer,” he was quoted as saying.

ALSO READ: Age is just a number and Cecil Wright proves it playing cricket at the age of 82

“And I keep fit, although these days I use my age as an excuse to miss training. I find keeping active helps to ease aches and pains. I don’t like to sit still and watch TV, I would rather have a walk or potter about in the garage.”

Wright will bring down the final curtain on his career on Saturday, September 7, turning out for Uppermill, near Oldham, against Pennine League side Springhead. 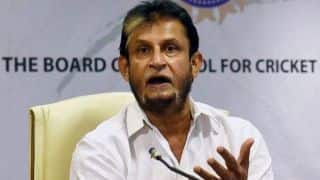