West Indies have a young batting line-up and are hoping that comes good.

West Indies and England clash in the second Test at Grenada starting Tuesday. Following a dramatic finish to the first Test, where West Indies managed to save the game courtesy Jason Holder’s ton, the two teams are playing with the series level. England couldn’t get the victory they targeted and would be eyeing that win to get off and running in this series. West Indies would have confidence after saving the last game and would want to go a step further. West Indies vs England, 2nd Test Match, England tour of West Indies, 2015

The news before the second Test is that Sulieman Benn is no longer in the West Indies side for the game and instead pacer Shannon Gabriel has been included. They have the leg-spinner Devendra Bishoo in the side and he could be a replacement for Benn in the playing XI. On the other hand, James Tredwell is injured and it isn’t clear whether he would be ready to play. However, Peter Moores did confirm that Jonathan Trott will be playing the game, that too as an opener. Sulieman Benn dropped from West Indies squad for second Test against England

In the last game, Jermaine Blackwood stood out. West Indies have a young batting line-up and are hoping that comes good. With Darren Bravo, Kraigg Brathwaite and Blackwood, they have a new generation coming through the ranks, and it is perhaps time they take centre stage. Shivnarine Chanderpaul is in the side, but even he will not last forever. Under his watch, this generation can be moulded into dependable players. Jason Holder century helps West Indies save 1st Test against England at Antigua

West Indies have a good bowling attack, with Jason Holder, Jerome Taylor and Kemar Roach forming the core. This attack has the makings of being a dangerous unit and they would want to find consistency ahead of this Test. England needs to ‘think out of the box’ in 2nd Test against West Indies, says Ian Bell

England perhaps have a few questions their way. Skipper Alastair Cook needs a good innings to get back into the flow of things. Trott too is trying to find his rhythm on comeback. The likes of Ian Bell, Gary Ballance, Joe Root and Joss Buttler have been amongst the runs in the first Test and that will be a good sign for England. Their bowling is dependent on James Anderson, who has entered the 100-Test club and is going strong; becoming England’s leading Test wicket-taker would have done his confidence no harm either. Along with Stuart Broad, this is a good England attack. Ian Bell says, West Indies’ fight did not surprise England

Again England will start as favourites, but West Indies are a dangerous side and have done well to keep things even. You cannot write them off. England tour of West Indies 2015: Complete coverage 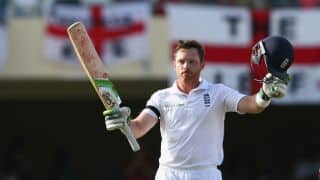 England needs to 'think out of the box' in 2nd Test against West Indies, says Ian Bell