Recalling the Test series in Sri Lanka, Bairstow admitted to being frustrated.

Losing the wicketkeeper’s role in England‘s Test XI to Ben Foakes in Sri Lanka last year, after suffering an ankle injury during training, and then returning as a specialist batsman for three games, was a wake-up call for Jonny Bairstow.

In an interview with Wisden Cricket Monthly, Bairstow spoke of the hardships endured in Sri Lanka and how the realisation that his career could change in an instant forced him to take stock of his game. (READ: Bairstow back in middle order “bad news” for Foakes: Bayliss)

“It’s [wicketkeeping] embedded in my DNA, I’m afraid. Of course I missed it. I did it for three years, worked hard, and all of a sudden it’s gone. I had to re-evaluate, change my mental state and think about a lot of other things,” he said. “If you play a shit shot, you don t have keeping to take your mind off it. If you drop a catch, you have your batting to fall back on.” (READ: England were never under pressure chasing 361: Morgan)

Injury to Bairstow in Sri Lanka in November opened up a spot for Foakes to take over, and he kept wickets in five consecutive Test matches until he injured himself during the second Test in Antigua recently. Foakes, who was a late arrival to Sri Lanka after being named as backup for Bairstow, was named Man of the Series in a famous 3-0 England sweep of Sri Lanka. After landing in Colombo ahead of the first Test, Foakes was ushered into England s XI in Galle and made an immediate impact with a century on debut and was Man of the Match, which he termed as a surreal few days .

Bairstow returned to England s XI for the final Test in Colombo and scored a century from No 3, and batted at the same position during the first two Tests in the West Indies recently. When Foakes injured himself in Antigua and was not passed fit for the St Lucia Test, Bairstow took over the wicketkeeping duties and batted at No 7 with Joe Denly given a shot at one-down.

Recalling the Tests in Sri Lanka, when he had to sit out when injured and then overlooked, and then when the SSC Test where he returned and scored a century, Bairstow admitted to being frustrated.

“It’s the difficult times, sat alone in your hotel room a bit down, waking up knowing you’re going to rehab not to train. When you get back, and score a hundred at the first opportunity, it is a passionate thing,” he said. “I was sleeping on an ice machine, sleeping with cushions at the end of my bed so my foot was elevated, all trying to get the swelling down. The boys were training and I’m just sat in my room helpless. I knew I had two weeks and if I didn’t get the swelling down it could turn into a nightmare.”

England next play Test cricket after the 2019 ICC Cricket World Cup, when they host Australia for the Ashes in August-September. 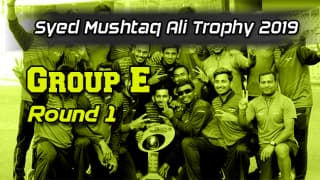